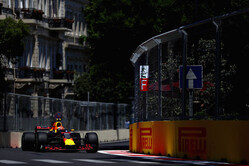 With the cars and tyres wider this year, a number of drivers have expressed concern at the tight twisty part of the circuit where the track winds around the Castle.

Not for the first time, before a wheel has turned or an engine fired up, both McLaren drivers have grid penalties (15 places) having fitted new MGU-Hs and Turbos.

With its smooth track surface, Mercedes is expected to struggle much as it did in Monaco, as it tries to get its tyres into the correct temperature window, Pirelli predicting it could take two laps.

As the lights go green there is a flurry of activity and in no time at all there are 15 drivers on track, among them Bottas and the Ferraris.

As Grosjean reports that his car is pulling to the left under braking, Verstappen heads out sporting a shed load of sensors.

A good mixture of softs and mediums, with Wehrlein the only driver on the supersofts.

Stroll complains that his brake pedal is "very, very soft".

A number of cars sporting lots of sensors like Verstappen's Red Bull, among them Palmer's Renault and Perez' Force India.

A big lock-up for Grosjean as the Frenchman continues to complain about the car under braking though he is assured temperatures on both sides are equal.

As the Frenchman posts the first time of the day (52.952), Massa heads out for the first time, the last driver to make an appearance.

Magnussen posts 50.446 only to be leapfrogged by teammate Grosjean (49.947) again moments later.

Despite being late to the party, Massa goes straight to the head of the timesheet, the Brazilian crossing the line at 48.002, teammate Stroll posts 53.932.

"Keep doing lift and coast at the big braking events," Grosjean is told, as Stroll is struggling getting his tyres up to temperature. As Ocon weaves from side to side it is clear that the Canadian isn't the only one.

"We've seen the medium, soft and supersoft compounds out already," says Pirelli. "But how much more will we be seeing of the medium this weekend?"

Verstappen complains that his "battery is completely empty".

A spin for Massa at T1 as Ricciardo goes ninth and Ocon tenth. The Brazilian is told to keep the temperature in the front tyres.

Having improves to second (48.108), Vettel has a major wobble at T16. Moments later, teammate Raikkonen heads down the escape road at T15, a corner that caused more than a few problems last year.

A 48.004 sees Verstappen go third, the Red Bull driver the highest-placed runner on the medium rubber.

Twenty-eight minutes into the session, and Hamilton heads out again, along with Bottas, Sainz, Ericsson, Vandoorne and Kvyat, he has yet to post a time.

As Hamilton posts 46.617 to go second, Bottas spins at T12 after clipping the kerb.

A 45.497 sees Hamilton take the top spot, as Verstappen is advised that though he has lost second to Perez the Mexican was on softs.

As Ricciardo, like his teammate on mediums, improves to sixth, Ocon goes fifth with a 46.892.

After 36 minutes or running, neither Toro Rosso driver has posted a time, both having completed just 4 laps.

In the speed trap, Alonso is around 30 km/h slower than Hamilton.

As we reach the 40-minute mark, when the extra set of tyres has to be handed back, it's: Hamilton, Perez, Verstappen, Massa, Ocon, Ricciardo, Vettel, Bottas, Raikkonen and Magnussen.