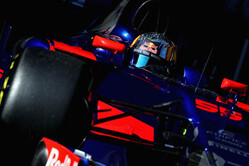 Carlos Sainz: "What a result, what a perfect weekend! We need to enjoy this moment, because it's not usual to achieve a faultless Grand Prix on the streets of Monaco - and this time we did! We put in good laps in practice, in yesterday's qualifying session and, in today's race, we were able to keep a World Champion in a faster car behind and finish P6 - it definitely feels so good! We've also been quicker than the rest of the midfield throughout the whole weekend and I'd like to thank the whole team for this, they gave me a very good car to drive! I really enjoyed today's race - now it's time to celebrate this well-deserved result with the team before starting to think about the Canadian GP, which is up next!"

Daniil Kvyat: "How annoying! Unfortunately, Perez just drove into me, trying a very desperate move, and he ruined our race. It's even more frustrating because I was feeling good in the car, it was just getting better and better and until that moment I was fighting for points, running in P9. It's been a challenging weekend, but it could've ended up with a positive outcome if the crash hadn't happened - every time we were in free air we were very competitive! Let's hope we have a better end to the race next time out in Canada."

Franz Tost (Team Principal): "We had a very competitive package from the very start of the race weekend here in Monaco and our drivers have been showing a very good pace since Thursday. On Saturday, Carlos did a very strong qualifying, finishing in P6. Daniil, on the other hand, was a bit unlucky because of the yellow flag caused by Vandoorne's crash - this happened during Daniil's fastest lap and therefore he had to slow down and qualified only P11. In the end, he started the race from P9 because both McLarens got a penalty. Unfortunately, his start was not the best, losing two positions to Hulkenberg and Magnussen. Later on, he had a competitive race and whenever he was in free air he did very competitive lap times. Unfortunately, his race was over because of a crash with Perez, which was, in my opinion, the Force India driver's fault because you cannot overtake in that part of the track.

"Regarding Carlos, he did a fantastic job. He had a great start, defended his position well and performed a very competitive race. He resisted well against the pressure from Hamilton, without making any mistakes, and he definitely deserves this sixth place finish! The team is still in fifth position in the Constructors' Championship by scoring another eight points here - we have now a total of 29 and are nine ahead of Williams. This is very positive and I'd like to thank everyone - the engineers for setting the cars up well and the mechanics for more fast and precise pit-stops! We will now focus our attention to the next race in Canada... Let's see what we are capable of there."