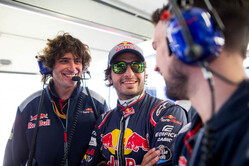 Carlos Sainz: "Wow. Just WOW! I feel so good, what a lap! This is definitely the most enjoyable lap in qualifying of the whole season - the one where you're on the limit the most, the one that gives you the biggest adrenaline rush, the highest heart beat... And to qualify P6 at such a track is just an amazing result! It's something that we absolutely deserve after a very complete weekend, building it up until this afternoon's qualifying. I must say that in Q1 I was a bit surprised with the pace of the midfield, as they all suddenly caught us up and we therefore had to start putting in fast laps from the very start - something I don't like to do here in Monaco, I prefer to build it up little by little. Then in Q3, I was able to put the best lap of the weekend together and I'm a very happy man! I can still feel the adrenaline! Regarding tomorrow, I'm confident we can have a good race - we are fast in both long and short runs so we just need to make sure we get everything right at the start, lead the midfield and try and attack when possible! I will enjoy a good dinner tonight!"

Daniil Kvyat: "I was unlucky with the crash that happened during the final moments of Q2, how frustrating! We've looked very promising all weekend, so it was a shame to miss out on Q3. I think we could've got through if the session hadn't been yellow-flagged. However, realising that I will start tomorrow's race from P9 because other drivers have been penalised makes the chances of finishing in the points even higher. I know it's a different circuit, but in Barcelona I started last and finished in the top ten, so we're not in such a bad situation here! There's no point being upset, we just need to keep our heads down and work hard tonight to prepare the race well. Tomorrow we will try to go forward and hopefully fight for good points - anything can happen here in Monaco!"

James Key (Technical Director): "So far, we've been quite happy with the weekend. In this morning's FP3 we continued a little bit with the trend of what we saw on Thursday with setup and car balance, as well as investigating a few alternatives. We ended up in a situation where it was really all about fine-tuning, as there was nothing fundamental to fix. We knew the track conditions were going to make the balance of the car a little bit more difficult in the afternoon, so that was something to try and predict. Regarding this afternoon's qualifying, I have to say we have mixed feelings - our heart goes out to Daniil a little bit; he's been flying all weekend and he thoroughly deserved a Q3 place, but he had pretty much everything thrown against him during a very intense and difficult qualifying with the traffic and the requirements of the tyres with multiple laps. He got called to the scales, got blocked a couple of times in Sector 3, which lost him otherwise good lap times and then he caught the yellow flag at the end of the session on his final run... Therefore, he wasn't able to get his lap time in and it's a real shame - he missed out on a definite Q3 position. We will now try our best to make it up to him in tomorrow's race as best we can. On the flip side, Carlos is exactly where we needed to be - he executed Q3 very well and made a good call on the approach with each run. P6 was just about as far as we could get today I think, even though we're not that far behind the car in P5. He put a good lap together at the end and controlled it extremely well - a great job from him in difficult conditions. Now it is heads down in preparation for tomorrow's race."