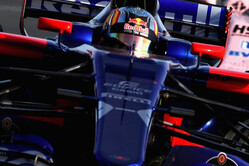 Carlos Sainz: "What a tough race, especially as we were starting from behind because of the grid penalty… But today we got everything right: the start, the first lap, the pit-stop, the strategy… So we can be happy! We did a good race and recovered well from P14 to P10, which I think was the maximum we could do this weekend. After the pit-stop it was a bit of a lonely race for me and I just had to control the gap to Stroll, which we managed to do well. I must say that now I'm really looking forward to the next race in Barcelona -it's a track where I've always performed very well and to race in front of my home crowd is always very special. I also have my own grandstand there, so a lot of people will be coming to support me and this will surely be one of the highlights of the weekend."

Daniil Kvyat: "My start today wasn't the best and I lost a bit of time there. During my pit-stop, we managed to get past Magnussen even though we then got undercut by Stroll and during my second stint I was unfortunately blue-flagged quite a lot and lost some more time having to let the leading cars by. I'd like to point out that my first comments after jumping out of the car this afternoon were maybe a bit too hard on the team - after having sat down with my engineers I understand why the team called me in a bit too early for my pit-stop: at the time, it was a very difficult call to make and nobody knew that the leading teams were going to stay out for so long. On a positive note, the last part of the race, in clean air, was fantastic - we were flying and the car felt great! We now need to bring what made the car so good into the next races."

Franz Tost (Team Principal): "Sochi wasn't an easy race weekend for us, as we struggled with the speeds on this circuit's long straights. Therefore, we didn't manage to do a good qualifying session yesterday. As for today's race, in the end, both cars saw the chequered flag and Carlos managed to score a point, which is important for the Constructors' Championship. We knew from the beginning that this would have been a tough race for us, but we are positive for the future and looking forward to the next race in Barcelona. We will be bringing some upgrades there - let's see what the rest of the teams do, but I'm confident we can get back into the fight for the top positions of this intense midfield battle."