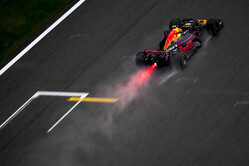 The fastest time in Friday free practice was set by Red Bull driver Max Verstappen on intermediate tyres, in damp and cold conditions during FP1.

So far there has been no dry running, and the foggy conditions also meant that the medical helicopter was unable to fly, leading to FP1 being shortened and no running at all in FP2. Nonetheless, the fastest time set by Verstappen on the 2017-specification intermediate tyre was seven seconds faster than last year's intermediate time in FP3 in China, when the equivalent tyre was used in similar conditions.

Mario Isola: "Today was the GP debut for our 2017-specification wet and intermediate tyres. We also have a wet weather tyre in a different compound with the target of providing more grip. Its test wasn't particularly significant due to the lack of running. However, we did see a fastest time from Max Verstappen that was seven seconds faster than the intermediate tyre in China last year. With both the wet and intermediate tyres being new this year, the crossover points are different and we saw the teams experimenting with those in FP1. The weather forecast still seems uncertain for the next few days so it's hard to know what to expect tomorrow and for the race."