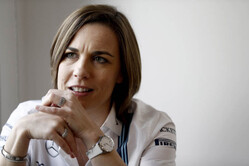 In the aftermath of the world champion's shock announcement almost every driver on the grid was linked with the seat, arguably the most coveted in the sport, coming, as it does, on the back of the Brackley outfit's third successive title win.

Speaking in Birmingham, Williams, admitted that it was now almost a case of dotting the Is and crossing the Ts.

"As soon as Nico made his announcement, I knew the call was going to come from Toto," she said. "I know he's always admired Valtteri's talent, many people do.

"For us, you don't want to stand in the way of a driver who has the opportunity to go and race finally in a car that's winning races, that's winning world championships," she added as she shed light on the move by Ferrari to sign the Finn in 2015, claiming that rather than the Maranello outfit losing interest the Grove outfit rebuffed its advances.

Though admitting that Bottas was on his way, she was unwilling to confirm that Felipe Massa was returning to the team to replace him, only suggesting that the man who steps into the vacant seat is a credible replacement.

"We need to make sure that if we are to release Valtteri, we have the best credible option to replace him with but also put in the best structure that supports that moving forward. I wish I could announce who it was, but we are still crossing the Ts and dotting the Is at the moment with all of the contracts. We will be making an announcement shortly because we are testing soon and we all want to know who's going to be driving for us."

She also refuted claims that the driver deal was connected in any way to the engine supply from Mercedes - though many are of the belief that the Grove outfit is looking for a substantial discount to sweeten the move.

"Just because we're a customer of Mercedes, doesn't mean Toto can pick up the phone to me and I go 'alright then'," she insisted. "Anyone that knows me knows that I don't just go, 'alright then', when someone phones me saying they want something.

"We pay for our engines," she continued, "we pay on time for our engines and therefore they don't have any right to come to us and say, 'you need to release this driver for us'. If I decided not to release Valtteri, then Mercedes would be fine and say 'no problem, thank you for thinking about it'."