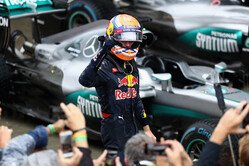 Although his "easy" win takes him to within twelve points of teammate and title rival Nico Rosberg, Lewis Hamilton believes that had Red Bull not pitted Max Verstappen for intermediate tyres in the latter stages of the race the difference could have been a more manageable nine points.

When Daniel Ricciardo switched to intermediates following the second race stoppage, soon after the Australian began posting fastest times in various sectors. Even though conditions were expected to deteriorate Red Bull opted to pit teammate Max Verstappen who was running third at the time and looking certain to pass Rosberg as he had earlier in the race.

Later still the Dutch youngster (and his teammate) were pitted again, this time for the full wets, dropping him to 14th.

While the subsequent fight back is being widely recognised as one of the greatest drives in living memory, it left Hamilton frustrated that but for the intermediate stop the gap to his rival might have been smaller.

"When the team called me and said, 'people are starting to pit for inters,' I'm like, 'they're crazy, there is no way it is going to last, and they are going to have to pit again'," he said at the end of the race. "That's what they did and it is a shame, but there is nothing I can do about that.

"Verstappen still had a great race, and got back up to third," he admitted, "but it would be good if they made some good calls at the next race."

Indeed, the final stint saw the Dutch teenager climb through the field from 14th to 3rd, 10s behind runner-up Rosberg.

Finding grip where others were tip-toeing with extreme caution the Red Bull driver made the likes of world champions Fernando Alonso and Sebastian Vettel look silly. Indeed, such was his frustration at being passed in such conditions the German accused Verstappen of forcing him off the road.

His recovery was amazing, and that was one of the best drives I've seen in Formula One," said Christian Horner. "We gave him a huge amount to do and the way he drove those last 15 laps was unbelievable. Max was in a league of his own today, and what we witnessed was something very, very special."

A statement few would disagree with.