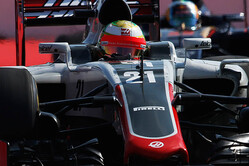 Haas F1 Team drivers Esteban Gutierrez and Romain Grosjean finished 19th and 20th, respectively, in the Mexican Grand Prix Sunday at the Autodromo Hermanos Rodríguez in Mexico City. The result capped a frustrating race weekend for the first-year team, as struggles in practice on Friday led to a disappointing qualifying performance on Saturday with neither driver getting out of Q1.

Gutierrez started the 71-lap race from 17th in the 22-car field, while Grosjean started from the pit lane. Crew members had to change the floor of Grosjean's car race morning, and because it was different from the floor used in qualifying, FIA regulations required a pit-lane start.

Gutierrez made some headway at the start, surviving getting sandwiched between the Sauber of Marcus Ericsson and the Manor of Pascal Wehrlein through turn one of the 4.304-kilometer (2.674-mile), 17-turn circuit. Despite contact that sent Wehrlein spinning off track and into Ericsson and then into the barriers, Gutierrez emerged unscathed in 14th.

The accident triggered the Virtual Safety Car (VSC), and after a handful of drivers headed to the pits for service, Gutierrez remained 14th and Grosjean moved up to 19th.

Shortly after the race went green on lap four, Gutierrez battled the McLaren of Jenson Button and the Renault of Kevin Magnussen for 12th. By lap six, the duo had pulled away and Gutierrez's mirrors were filled with the charging Red Bull of Daniel Ricciardo.

Ricciardo got by on lap seven to drop Gutierrez to 15th, a position he held until his first scheduled pit stop at the end of lap 13. Off went the Pirelli P Zero Yellow softs tires Gutierrez started the race with and on went a new set of White mediums.

Grosjean pitted a lap before Gutierrez, initiating the tire strategy for both drivers. Not long after exiting the pits, Grosjean keyed his radio to say, "I can feel no rear downforce."

The lack of downforce combined with the slippery track surface prohibited Grosjean from making significant forward progress. He managed to pass the Manor of Esteban Ocon for 20th when Ocon made his scheduled stop, but that was all Grosjean could get.

Gutierrez, meanwhile, had dropped to 19th after his pit stop and was running a few seconds ahead of Grosjean.

Gutierrez made his final pit stop at the end of lap 50, swapping the White mediums for new Yellow softs. Grosjean followed at the end of lap 52, emulating the tire strategy of his teammate. Their positions remained unchanged, with the two running 19th and 20th all the way to the checkered flag.

Winning the Mexican Grand Prix was Lewis Hamilton. It was the Mercedes driver's 51st career Formula One victory, equaling the tally of legend Alain Prost. It was also Hamilton's eighth win of the season and his second in a row, but first at the Autodromo Hermanos Rodríguez. Hamilton's margin of victory was 8.354 seconds over his Mercedes teammate and championship leader Nico Rosberg. The victory cut Rosberg's advantage over Hamilton from 26 points to 19 points with only two races remaining.

Nineteen rounds into the 21-race Formula One schedule, Haas F1 Team remains eighth in the constructor standings with 29 points. The American squad kept the gap to seventh-place Toro Rosso at 26 points and maintained its 21-point advantage over ninth-place Renault, as neither Toro Rosso nor Renault finished in the points.

Formula One takes a weekend off before returning to action for the season's penultimate race - the Brazilian Grand Prix Nov. 13 at the Autodromo Jose Carlos Pace in São Paulo.

Romain Grosjean: "We tried to change a few parts to analyze what was going wrong, but we really haven't found the problem yet. The car was just nowhere today. It was very difficult to handle and to drive. We didn't get anything right. We're experiencing inconsistency with lots of oversteer and understeer. I never knew what I was going to get out there. The car was pulling on the left under braking. It felt weird. It was just a very difficult day."

Esteban Gutierrez: "It was an incredible experience. We were pushing all the way, pushing all the limits we could with the car we had. I had to take care of the brakes as we were struggling with the cooling of them, so I had to brake a lot earlier than I would have liked to. This wasn't ideal when trying to fight your way up the grid, but it's the only thing we could do to finish the race. I wish we could have been able to deliver something better this weekend but, unfortunately, we were not able to this time. However, it was an amazing weekend - racing in my home country in front of all the Mexican people - and I really want to thank them because they've really made it a race to remember."

Guenther Steiner: "It was a tough day and a tough weekend for us. We started on the wrong foot and it ended how it ended. Sometimes you have to go through bad experiences like this to be able to learn from them. I hope this is our only bad weekend of the year. We've got two more races to go. We'll get ourselves ready for those and get our spirits up again. We saw this coming on Friday, so today's result is not too unexpected. A race like this just makes it a long day."