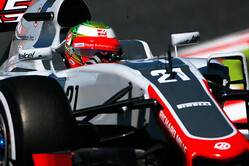 Gutierrez and Grosjean have struggled to find grip on the 4.304-kilometer (2.674-mile), 17-turn track. The slippery surface contributed to Gutierrez spinning as he exited the esses in the final minute of Q1, thwarting his last attempt to break into Q2. The spin also impacted Grosjean, who came upon Gutierrez and had to abandon his flying lap. Both drivers utilized the Pirelli P Zero Red supersoft tire in Q1.

Taking the pole for the Mexican Grand Prix was Mercedes driver Lewis Hamilton. His fast lap of 1:18.704 set a new track qualifying record and was .254 of a second better than his nearest pursuer, teammate and championship leader Nico Rosberg. It was Hamilton's 59th career Formula One pole, his 10th of the season and second in a row, and his first at the Autodromo Hermanos Rodríguez. Even with Hamilton on the pole, Rosberg remains in the driver's seat in the championship standings. He holds a 26-point advantage over Hamilton heading into Sunday's race.

Before Gutierrez, Grosjean and the rest of their Formula One counterparts participated in knockout qualifying, they had one final practice (FP3) to dial in their racecars for a quick lap around the track. To emulate qualifying, both drivers ran exclusively on the Red supersofts.

Romain Grosjean: "I really don't know what's happening. The car was good in FP1 and it was alright on the first run this morning in FP3, but after that it's just gone nowhere. We really need to try to analyze what's going on as something is clearly not going right. Last on the grid is unacceptable for us. Top speed has been fine, but there's no grip and no balance. You can manage poor grip and drive around it if you've got a balanced car, but combined, there's just nothing you can do. One corner will be oversteer, the next understeer. It's weird the way it's behaved here. It's been a rough weekend for everyone, but hopefully we can come back."

Esteban Gutierrez: "It's been quite a challenging weekend for us. Heading into qualifying, we knew it wasn't going to be easy, but I really gave it my best. I was driving over the limit trying to put everything together for the team and for the fans - they have been incredible. I had to try to be aggressive as I knew the lap at the beginning of the run may not have been enough. Sometimes you get it right, sometimes you don't, but at least I know I gave it the maximum. When I got out of the car, I wasn't very happy, but walking along the pit lane everybody was cheering, and it was an amazing feeling just to see their support. They've made a huge difference to our motivation and I really want to thank them all."

Guenther Steiner: "Obviously, we were not very hopeful today after we struggled from FP1 to FP3 to understand these tires, to get them in the window to work. Nevertheless, last week we started 17th and ended up in the points. This is very weird how the tires behave here, with the track temperature coming up as it did in 10 minutes. Everybody seems to be a little bit lost with where it is going. We just need to keep our heads down today and try to do the best for tomorrow. We'll see how it pans out. Like always, it's a difficult moment today, but we hope for a better one tomorrow."