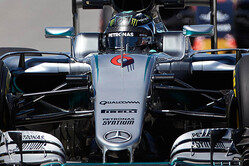 The mixed conditions this morning ultimately provided the sort of timesheet that, if transferred to grid order, would have us all salivating.

While Nico Rosberg made it a clean sweep, fastest in all three sessions, teammate Lewis Hamilton was down in seventh, just ahead of the Renault duo who posted identical times.

Ahead of the Briton was Felipe Massa, with Alonso splitting the two Force Indias in 11th.

While overnight rain had washed away yesterday's rubber, its fair to say that had conditions been ideal many drivers would have still struggled.

A super slo-mo shot of Felipe Massa's Williams showed his right-rear degrading after just one lap, a situation that many of the drivers find themselves in.

A Control Unit issue meant Carlos Sainz only complete 3 laps however, the Spaniard wasn't along in encountering problems. A flat-spot meant Max Verstappen couldn't see, while both McLaren drivers are having a torrid time, Jenson Button even complaining that his helmet didn't fit.

Before the drivers turn a wheel, it's worth noting that Sebastian Vettel, who has had a clear shot fired across his bow by team boss Maurizio Arrivabene, has a three-place penalty following last week's first lap crash, while Pascal Wehrlein also gets a (5-place) penalty after the team changed his gearbox out of sequence.

Ahead of Q1, the air temperature is 23 degrees C, while the track temperature is 26 degrees. There has been no further rain since the overnight storm but it remains overcast with dark grey clouds all around. Indeed, race control confirms there is a 30% chance of rain.

The lights go green and Ocon leads the way, followed by his teammate and Sainz. Rosberg is also out early, as is Hamilton. The Briton is told to "work those fronts".

A 33.080 sees Grosjean go third as more and more drivers head out.

Grosjean is demoted by his Haas teammate who posts 32.709 as Nasr goes fourth ahead of Button.

Verstappen posts 32.487 to slot in behind the Mercedes duo, with teammate Ricciardo going fourth. The Bulls and Mercedes drivers are on mediums while everyone else, including the Ferraris, is on softs.

On the softs Hulkenberg posts 32.448 to go third, however he is demoted when Raikkonen goes quickest with a 31.674.

"The track is faster than we expected," Ricciardo is told. "We'll get ready for another lap." Indeed, the Australian has slipped to seventh.

A 31.659 sees Vettel go quickest, like his teammate he's on the yellow-banded rubber.

With 5:20 remaining, Button, Sainz and Palmer are in the drop zone, along with the Manors and Ericsson. Magnussen, Nasr and Grosjean are hovering.

While the top nine appear to have settled, a late move sees Verstappen, Ricciardo and Kvyat head out clearly not totally confident. In ninth, Perez takes a gamble and opts not to come out again.

A PB is S1 for Button, Grosjean also looks set to improve.

The Briton maintains his pace in S2, as the Red Bulls pit.

A late, late improvement from Massa (32.562) sees the Williams driver go tenth, which means an early bath for Button. Teammate Alonso makes it into Q2 by the skin of his teeth (0.032s).

Told his time, Nasr asks "Why was it so bad?" "We'll discuss this," he is told, much like your mother used to say.

Rosberg and Hamilton get Q2 underway, the pair, both on softs, clearly mindful of those increasingly grey skies. That said, there is no rush to join them.

Again, Rosberg is the quicker, though only just. The German crosses the line at 30.714, while Hamilton can only manage 31.129 having run wide in Degner 1.