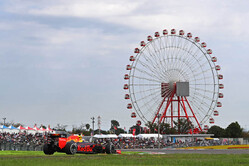 Ahead of today's second free practice session the air temperature is 23 degrees C, while the track temperature is 33 degrees. It remains bright and sunny.

Nico Rosberg topped the timesheets this morning, finishing 0.215s ahead of his teammate, in a session which, not for the first time, had a rather symmetrical look about it, with the Ferraris heading the Red Bulls, Force Indias...

The only incident of note were offs for Fernando Alonso and Romain Grosjean, the Spaniard merely losing the rear while the Frenchman, not for the first time, appeared to have a brake issue. Finishing ninth quickest, Alonso never reverted to the soft rubber, nor did the Red Bull duo.

The lights go green and, as in FP1, Grosjean gets proceedings underway. In time he is followed by Wehrlein, Gutierrez, Button, Alonso and Vettel. Indeed, at one stage on their out laps, the two world champions are side-by-side.

Of the first wave, which really only features eight drivers, Vettel goes quickest, the German posting 1:34.150. Like Alonso, who goes second, the German is on the hards.

Magnussen goes off in a great cloud of dust at T11 after a heavy lock-up, but is able to continue.

Having made a mistake on his first lap, Raikkonen improves with a 34.408 to go second to his Ferrari teammate.

"A lot of smoke coming out of the back," remarks Rosberg as he waits to perform a practice start. His team, on the other hand, doesn't appear unduly bothered.

A big, big moment for Kvyat coming out of the final corner, the Russian doing a magnificent job of keeping it all together as the car spun wildly.

Switching to the softs, Vettel goes quickest in S1, while Hulkenberg, also on softs, posts a PB. Both appear to be doing qualifying simulations.

Perez (softs) goers third, splitting the Mercedes duo with a 33.570.

Great super slo-mo shot of Massa's Williams bouncing around at the final chicane, shortly after we get a similar shot of Hamilton.

Now it's Hamilton's turn, and as one would expect the Briton goes quickest in S1. He loses a little pace in S2, and again in S3, finally crossing the line 0.072s down on his teammate. Meanwhile, Raikkonen has posted 32.573 to go third.

Ricciardo is the first of the Red Bull drivers to switch to the soft tyres, teammate Verstappen following suit shortly after.

At which point Gutierrez pulls off track just before the Degner Curves, bringing out the VSC.

"OK, something broke," he tells his team.

All of which has ruined Ricciardo's qualifying simulation.

When the VSC is withdrawn, Gutierrez' car having been lifted to safety, there is a scramble to get back to work.

Verstappen is back on track on softs, as is Ericsson, whose qualifying sim was also ruined, but no sign of Ricciardo.

Ricciardo is in his car, helmet off, but it is unclear whether he will do a qualifying sim or go straight to long runs on heavy fuel.

Verstappen complains that he has no grip, "the tyres are too cold".

"It's pretty bad understeer," complains Raikkonen, "feels like I'm running without the front wing." Wow, it must be bad. As if to prove his point the Finn runs wide at the hairpin.

As the long runs get underway, most are on softs, though Raikkonen and Ericsson are on mediums and Sainz, Magnussen, Grosjean and Wehrlein are on hards.

Ricciardo appears to be going straight to long runs and abandoned plans for the qualifying sim.

Big wobbles for both Massa and Raikkonen at Degner, both running wide and over the artificial grass.

Raikkonen complains of a misfire, another calamity to befall the Finn who already believes he is running without a front wing.