Wolff: No rational explanation for failures 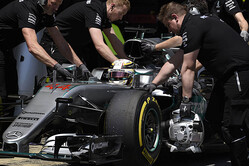 Toto Wolff reiterates that there are no links between Lewis Hamilton's numerous failures.

Having flown Hamilton's Sepang engine back to Brixworth in the UK for investigation, Mercedes remains none the wiser in terms of the cause. Furthermore, the team is unable to find a link between this failure and those that blighted the early part of the Briton's season.

"We've talked amongst ourselves and said "how is this possible?"," said Wolff, referring to talks held sing Sepang with Hamilton.

"There is no rational explanation or pattern in these failures," he added. "If there were, we would resolve it.

"We've had that discussion with him and he understands that we are feeling his pain too and despite his frustration, he has been trying to pick the team up and we admire him even more than ever for that.

"It's tough when these things come at a crucial point in a championship battle. It's a massive blow to his campaign. But the championship isn't over yet. There are still five faces to go. It will be tough of course, as Nico is driving better than ever before. He proved that in Singapore and then again with a great recovery in Malaysia. We will let them battle it out on track over the next five races - hopefully without any reliability woes - and then see where we are."

"We are continuing to investigate the issue and are doing everything we can to ensure that it is first understood and then contained for the remainder of the season," added Paddy Lowe. "As it stands, despite the failure of this engine, Lewis now has the same stock of power units as Nico for the remaining five races, including used power units which he can fit for free practice sessions."