Hamilton: I'm going to give it everything I've got 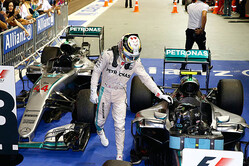 It is in the superb Larry David series Curb Your Enthusiasm that comedian Richard Lewis claims to have originated the act of describing the worst of something as: "The ... from hell."

Whatever, Lewis Hamilton can pretty safely say that Singapore 2016, much like Singapore 2015, was the weekend from hell.

The three days were littered with issues, some of his own making, many not. Consequently it came as no surprise when the nightmare continued into the race.

Though he made a good start, being third on the grid on such a circuit meant it was always going to be an uphill battle.

Then the problems began, the Briton, like his teammate, suffering brake issues and then his team opting to change his tyre strategy.

Despite seeing the title lead swing back in his teammate's favour, and at a time some headlines would have you believe the Briton might as well stay home for the rest of the season, the three-time world champion insists the title fight is far from over.

"It doesn't always go well and this has been a difficult weekend for me and my side of the garage," he admitted. "But we will reunite and regather and understand what went wrong and try to rectify it for the next race."

The Briton, who on Saturday claimed he has "been on the back foot" all year, despite coming off a run of six wins from seven races, insists that this hasn't been his year despite turning a 43 point deficit to a 19 point advantage and holding the championship lead until Rosberg took the chequered flag yesterday.

"All in all, with everything that's gone on this year, I'm still in the fight," he said. "There's still a long way to go and I'm going to give it everything I've got."

However, for the first time in some time he was magnanimous in terms of his teammate, having congratulated him as he climbed from his car.

"Nico did a fantastic job and the points he gained today he fully deserved," he said. "This weekend he's done an amazing job. I expect him to continue like that so I've got make sure that I do the same."

"I don't really have a reaction to losing the lead (in the championship), I'm not focused on points, I'm just happy with the win."