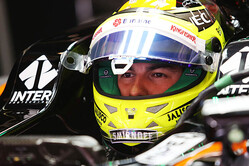 Sahara Force India scored four points in today's Singapore Grand Prix as Sergio Perez raced from P17 to P8 as the only driver to execute what was effectively a one-stop strategy. Nico Hulkenberg was the victim of a first lap incident, which eliminated him at the start. The points scored tonight move the team back up to fourth position in the constructors' championship.

Sergio Perez: "I am so happy about tonight's performance; it surely ranks as one of the best races in my career. To be able to do 36 laps on one set of soft tyres, in this heat, and to keep my position under pressure from Kvyat is a big achievement. Pitting on lap one put us behind Gutierrez and that impacted on our strategy: we lost a lot of time behind him and it was very hard on my tyres, which was not good for what was effectively a one-stop race. We knew stopping one time less than our rivals was the only way we could score points, so managing the tyres was crucial. There was no point fighting with Fernando [Alonso] after his last stop: he was in a different race and I knew I couldn't afford to destroy my tyres that early in the stint. It was the same with Max [Verstappen] - on a day like this I had to race intelligently and pick my fights to make the strategy work. It's a good result for the team and it puts us back in fourth place in the championship. It's a shame that Nico's race finished so early, but we were able to score some good points on a difficult night."

Nico Hulkenberg: "It's extremely disappointing to end my race in the barrier after just 50 metres, especially because I had made such a good start - probably my best getaway off the line this year. I went for the gap between the two Toro Rossos, which was there, but obviously things got very tight. I had Daniil [Kvyat] on my right and Carlos [Sainz] on my left, and Carlos hit my left rear, which sent me into the wall. I think all the avoiding actions led to the gap I was in disappearing. So it was a really frustrating end for me, especially because all the good work we did on Friday and Saturday counted for nothing."

Robert Fernley, Deputy Team Principal: "It was a rollercoaster race for us tonight - starting with a low and ending on a brilliant high. Losing Nico before turn one was very bad luck and he was just the innocent victim of a Formula One start. Having made a sensational getaway, he was clipped on his left rear, which pushed him into the wall and caused some heavy damage to the car. The resulting Safety Car caused us to roll the dice with Sergio as he pitted at the end of lap one, switching from ultra-soft tyres to softs. From there we deployed a brave strategy, which saw Sergio execute what was effectively a one-stop race as he stretched his second set of soft tyres over a mammoth 36 laps. It was a brilliant team effort from everyone, with excellent decisions being made on the pit wall, and Sergio executing an almost impossible strategy. It was a close call on tyre life, but we pulled it off. Considering the bad luck we have encountered this weekend, it feels very sweet to pick up four points and move back into fourth place in the constructors' championship."