Numerous updates for Sauber at Spa 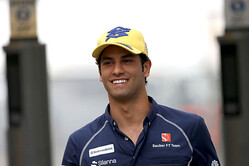 The Sauber C35 will feature a number of updates this weekend following the buy-out by Longbow Finance.

Despite the feeling that the buy-out of the Hinwil team is not a long-term solution to its problems, the short-term feel good factor continues.

Following the news that Max Verstappen's former engineer at Toro Rosso, Xevi Pujolar, has joined the Swiss team, Sauber has revealed a number of updates to its car as the second half of the season gets underway.

While a new rear wing was introduced before the summer break, when the C35 takes to the track tomorrow it will feature a new front wing featuring a noticeably shorter nose, a new floor and new front and rear brake ducts. Furthermore, the updates will be available for both drivers.

It's basically the first serious update of the year indeed due to the lack of updates (and money) the Swiss team missed both in-season tests.

The updates can't come soon enough for Marcus Ericsson and Felipe Nasr as the team currently languishes in last position in the standings having failed to score a single point.

Should the Swiss team fail to overhaul Manor, it would be the first time since it entered F1 in 1993 that it failed to finish in the top ten of the team standings.