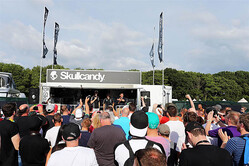 Force India is inviting fans to get even closer to the team with the launch of its Fan Zone at Silverstone Woodlands Campsite during the upcoming British Grand Prix.

Fans will be able to meet senior members of the team, ask the drivers questions, and get a close-up look at one of the team's F1 cars.

The Fan Zone stage will be the centrepiece for the team's activation at its local race. Daily interviews with prominent team members will give fans valuable insights into the sport and the team's progress over the weekend.

On Saturday, Sergio Perez and Nico Hulkenberg will headline the stage taking questions from fans in the campsite and around the world through Facebook Live in collaboration with Sky Sports F1. British racing legends, Damon Hill and Johnny Herbert, will join them on stage from 6pm.

The Fan Zone will allow Woodlands' campers to connect with the team's partners: the Kingfisher Beer truck shall be serving ice cold pints of India's finest, while audio brand, Skullcandy, will provide the soundtrack with their mobile beast hosting DJ sets.

Fans can get competitive in the Kingfisher Scalextric challenge, while budding racing drivers can show their skills on an F1 simulator provided by Codemasters. Aspiring F1 mechanics can indulge their fantasy by taking part in a wheel change challenge and keep energised with Hype Energy drinks.

Anybody who participates in the Fan Zone will be entered into a competition to win tickets to Sahara Force India's British Grand Prix party, held at the team's HQ in Silverstone on Sunday. Other prizes include a year's supply of Kingfisher beer, a karting experience and free energy drinks from Hype Energy, Skullcandy merchandise, team clothing, and a wheel rim coffee table.

"The British fans are some of the most passionate and knowledgeable in the world," said Vijay Mallya, "and they've always shown great support for Sahara Force India. That's why we wanted to give something back to bring them closer to the team.

"I've visited the Woodlands Campsite a few times before and I've always enjoyed the atmosphere. There's a true festival spirit and you can see how much the fans love our sport. I'm delighted we have created the Fan Zone and I look forward to meeting all the fans once again this year."