Leclerc to make F1 debut with Haas at Silverstone 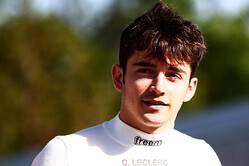 Charles Leclerc, a 2016 member of the Ferrari Driver Academy who is currently competing in GP3 with ART Grand Prix, will get his first taste of a Formula One car when he drives the Haas in the opening practice session for the British Grand Prix.

Esteban Gutierrez, a Ferrari Driver Academy alumnus, has relinquished his seat to allow Leclerc to obtain valuable Formula One experience.

Following Silverstone, 18-year-old Leclerc will reappear in FP1 sessions at the Hungarian, German, Malaysian and Abu Dhabi Grands Prix. In each session, Leclerc will drive the team's No. 21 car.

"This is a fantastic opportunity to get seat time in a Formula One car and I can't thank Haas F1 Team and Esteban enough," said Leclerc, who won the season-opening GP3 race at the Circuit de Catalunya. "I'm honoured by the faith Haas F1 Team and Ferrari have in me. This is an important step toward my ultimate goal of becoming a Formula One driver."

Leclerc has risen quickly through the karting ranks and into single-seaters. After winning 11 karting championships between 2005 and 2013, including an outright title in the 2012 WSK Euro Series Championship, he graduated to Formula Renault 2.0 in 2014, collecting a pole, two wins and nine podiums in 14 races. In 2015, Leclerc moved to the FIA Formula 3 EuroSeries, earning three poles, four wins and 13 podiums in 33 races.

"Charles Leclerc is highly regarded by Ferrari and his record speaks for itself," said Guenther Steiner, Haas team principal. "We're happy to provide this opportunity and help develop the next generation of Formula One drivers. Credit also goes to Esteban for sharing his race car and serving as a mentor to Charles."