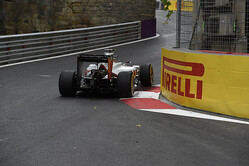 After a relatively frigid visit to Montreal, Canada, Formula One's inaugural visit to Azerbaijan has been inundated with heat and humidity. Teams tested the 6.003-kilometer (3.730-mile), 20-turn Baku City Circuit for the first time on Friday with two 90-minute practice sessions ahead of Sunday's 23rd running of the European Grand Prix and first since 2012's edition in Valencia, Spain. Haas F1 Team drivers Romain Grosjean and Esteban Gutierrez traded in simulated laps around the anti-clockwise running street course for a total of 100 circuit laps, with 49 credited to Grosjean and 51 to Gutierrez.

The afternoon's opening practice boasted an air temperature of 27 degrees Celsius (80 degrees Fahrenheit) coupled with 61 percent humidity and winds from the north of up to 38 kilometers per hour (24 miles per hour). Surprisingly, given the tight confines of the fast flowing layout, the session was only marred with one red flag incident – Red Bull Racing's Daniel Ricciardo hitting the wall at Turn 15 with 20 minutes remaining.

The session was stopped just as Grosjean recorded his best time on his 10th lap (1:49.611) to place him 11th overall. Running exclusively on the Pirelli P Zero Yellow soft tires, both Grosjean and Gutierrez set their fastest respective lap times on used sets of the compound. Gutierrez delivered his quickest lap on his third and final stint of the session. His time of 1:50.167 set on his 22nd lap placed him 14th among the 22-car field.

The Mercedes duo of Lewis Hamilton and Nico Rosberg topped the time sheets in FP1 with Hamilton's lap (1:46.435) edging Rosberg by .377 of a second on the Pirelli P Zero Red supersofts.

Conditions were overcast for the late-afternoon session but the temperature remained relatively consistent. Tire strategies were mixed for Grosjean and Gutierrez. Grosjean drove his first of three stints on the Pirelli P Zero White medium compound for seven laps. Switching to a new Red supersoft set for his qualifying simulation, his fastest lap (1:46.481) was his 14th of the day and good for 12th overall. His third and final stint comprised a 15-lap run on a used set of the Red supersoft tires.

Gutierrez started his second session on a set of the new Yellow soft tires before mirroring Grosjean's Red tire choice for his second timed outing. Posting a 1:46.830 tour on his 15th lap, it was good for 15th fastest on the time sheets. Later, just five minutes shy of the checkered flag, Gutierrez grazed the wall at Turn 8 which ended his long-run stint.

Hamilton edged Rosberg again for top honors at the end of FP2, increasing his margin over his teammate to .690 of a second with a best lap of 1:44.223 on the Pirelli P Zero Red supersofts.

Romain Grosjean: "Discovering a new track is exciting in some places and pretty tricky in others. It's not easy to find the right balance but I'm much happier than where we've been recently, so that's pretty positive. I'm sure there's still a lot to come from everything. It wasn't easy with the track temperature dropping this evening to find the right set up, but I think we're in a position where we're getting there finding the balance. Tomorrow we can improve a little bit. We're just outside Q3 which wouldn't be a bad place to start. The car definitely felt better than more recently and the tires were working better. There are still a few issues we need to solve but generally I'm happy."

Esteban Gutierrez: "It was a productive Friday for us. We had a good program and we managed to complete everything we wanted to do. It was very interesting to get to know the circuit. It's a fun track to drive. The car seems to be behaving well and the grip is better than I expected, so that's a positive we can take through the weekend. Obviously that will keep on improving so we need to make sure we follow that with the car setup to maximize its potential. I had a small touch with the wall toward the end of FP2 where the track becomes very tight due to a little bit of understeer, but it was ok and there was no damage to the car. Now I'm looking forward to tomorrow and to qualifying."

Guenther Steiner: "Good day today for both drivers on a new track. We managed to get through the test program we'd set out, so we're pretty happy with that. It doesn't seem that we've got the issues with the tires that we had with the last race, so that appears to be a little more under control. Now we're focusing our efforts on tomorrow and getting the car set up for qualifying, as we're pushing to improve our performance and move a little further up the grid."