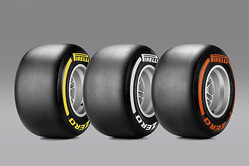 Pirelli will take its hard, medium and softs compounds to Malaysia in September.

The P Zero Orange hard, P Zero White medium and P Zero Yellow soft is the same combination used in Spain last month, and prior to Sepang will be seen at Silverstone in July.

Two sets of the hard must be used at some point in the race in Malaysia, when each driver will have both sets available and must use at least one of them.

Each driver must also save for Q3 one set of the softs. This set will be given back to Pirelli after Q3 for those who qualify in the top 10, but the remaining drivers will keep it for the race.

The teams are free to choose the remaining 10 sets; making up 13 sets in total for the Sepang weekend.

The new 2016 tyre regulations mean that tyre nomination for long-haul events have to be made 14 weeks in advance, whereas for European races the deadline is eight weeks in advance.