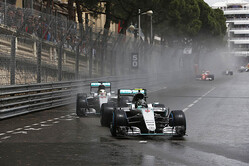 As the much anticipated challenge from Ferrari fails to get off the ground, and remain of the ground, it is Red Bull which seems best equipped to take the fight to Mercedes.

Indeed, errors aside, the Austrian team is the only outfit other than Mercedes to win a race this year, and the characteristics of the Montreal circuit, coupled with an updated Renault engine, put Daniel Ricciardo and Max Verstappen in a very good position to challenge.

"For sure we are feeling the heat from them," Nico Rosberg admitted to the official F1 website, "and obviously they were very strong in Monaco and in general they are coming at us very quickly.

"Nevertheless Monaco was a very specific track, because if you look at the Spanish Grand Prix the gap was a bit bigger.

"I think this is good for the sport," he added, "having some hot battles with other teams, although I am very confident that we still have the best package out there!"

Whilst he might be aware of the increasing threat from Red Bull, the German was unaware that teammate Lewis Hamilton is a four-time winner here.

"I was not aware of this piece of information to be fair," he said. "Personally I like this track a lot and our car is great and I am feeling good. So if I get my things right I can definitely go for a win here.

"Physically it is not demanding," he said of the circuit where his best result os a brace of seconds in 2014 and 2015, "as you have a lot of straights where you can relax.

"But the braking topic is not one of my preferred areas," he admitted. "During the braking event you go through various phases, such as the bite in the beginning, then the fading phase during which the temperature ramps up. For sure I’ve got my head around this, still it is not my preferred area. In Formula One we are a bit on the limit with the brakes in general. For the speed and weight of the cars the brakes have come to a point where they are on the edge."

Montreal comes off the back of a disappointing race in Monaco where he finished a distant seventh, thereby yielding 19 points to his teammate.

"We have looked at everything in detail and the conclusion is that it was a lot of rather small things that came together and not one major issue," he said. "One thing led to another and for sure Monaco is the most penalising track of all for having problems... and then you have it, a difficult result!

"If one or even more things come together you get a lack of feel for the car, and a lack of confidence as well, which results in holding back a little more, which then leads into another problem and then it is a downwards spiral. So basically everything went wrong that day.

"The positive is that we got them all out of the way and only good things are here to come again. I am feeling great now and I am aware that you will always have one race like this in racing. So I am not dwelling on that one! For me it is already a thing of the past and I am looking forward to a good weekend here."

And talking of yielding...

"The decision was easy and it was the right thing to do although of course emotionally very tough," he admits. "I do not have any second thoughts about this - when it comes to the future and that it maybe will get tight in the fight for the championship, it was the only right decision to do. It could have been the other way around as well.

"This is part of fighting for the championship as a team, and I was able to contribute to the win of the team in Monaco big time! In detail it was the right thing to give Lewis (Hamilton) the opportunity to give it a go, even though I did not 100% know if he was faster than me or not."