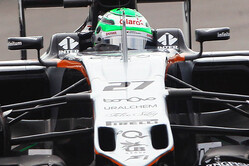 Nico Hulkenberg says his team is still in catch-up mode having been out-developed over the winter.

In recent years the Silverstone-based outfit has gained a reputation for starting the season strong and then falling by the wayside as it progressed. All that changed last year when the team introduced its B-spec car at Silverstone, going on to record its best championship result in its history.

After five rounds of this year's championship the team languishes in seventh, behind newcomers Haas and only two points ahead of McLaren. And while Sergio Perez has now scored points in successive races, including an impressive seventh in Spain, Hulkenberg, who finished seventh in Australia, suggesting that the team might be set to continue its 2015 form, has not scored since, indeed, he has failed to see the chequered flag in the last two races.

Two things are responsible for not being as competitive and quick as we thought," he told the official F1 website. "Firstly, my guess is that we've been a bit out-developed over the winter. And secondly, luck hasn't kissed us in races like China, Bahrain and Russia. A few unlucky incidents - the timing being not quite right - and that's what you get."

Along with McLaren, Force India took a number of significant updates to Spain, and the team hopes that this will begin to turn its season around.

"Of course we have a lot of hopes and expectations pinned to this package," admitted the German. "It will take time to fully understand what we've got here and what from the new parts and pieces will be implemented in the long run. I think at the next couple of races we will get wiser.

"We have already found more performance in the car in the wind tunnel, which we will introduce later in the year," he continued. "So there is no standstill. The season is still young and you cannot let it stand as it is right now.

"To be honest right now the standing in the constructors' championship is not really on my agenda," he insisted. "All we are working on now is to bring performance back to the car and start scoring points again. We will see where that takes us. We have 16 races to go... that's a marathon!"