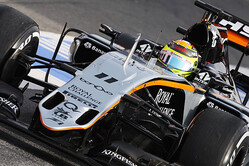 Sahara Force India scored two points in today's Russian Grand Prix as Sergio Perez delivered a strong recovery drive after suffering a lap one puncture. Nico Hulkenberg was out of luck after being hit by Esteban Gutierrez at turn two, which ended his race.

Sergio Perez: "It's obviously good to come away with my first points of the year, but without the puncture on lap one the result today could have been so much better. I didn't get the best start, but I found a good line going into turn two and I was ahead of Ricciardo and Vettel coming out of the corner. Then I realised I had a puncture, which dropped me to the back of the field. After that it was a recovery drive and I managed to get back up to ninth place just behind Grosjean. I had a quicker car and fresher tyres, but he had very good traction and I just couldn't get close enough to make a move. It's a shame not to score more points because we did everything right today, but we were just really unlucky. There are lots of positives to take away from this weekend - the great performance in qualifying and the strong race pace. The car is improving and we have some upgrades on the way so I'm feeling optimistic ahead of Barcelona."

Nico Hulkenberg: "It was a very frustrating end to my weekend. I got to turn two and felt a big shove from behind: Esteban (Gutierrez) out-braked himself, hit me and spun me around. I was hit by other cars and the damage was too much to even attempt to continue. It's very disappointing and not the way I wanted to celebrate my 100th race weekend. Hopefully our luck will change soon as we have been very unlucky lately. We should have some upgrades in Spain and I want to be back scoring the points we deserve."

Otmar Szafnauer, Chief Operating Officer: "It was another race in which we didn't fully reap the rewards of our work. Unfortunately, both our drivers fell victim to incidents at turn two, neither of which were their fault. Nico's race was over immediately, while Sergio had to make his way back to the pits with a puncture and re-joined last. From there on, we were able to display some good pace as Checo made his way through the pack, got back into the points and closed in on Grosjean. Despite having superior pace we couldn't progress any higher on this track which proved very difficult for overtaking. It means we leave Sochi with mixed emotions. Without the incidents on lap one, we would have been at the front of the midfield pack and with the pace to stay there. At least we can take encouragement from the performance that will help us at the upcoming races, where hopefully we will have a bit more luck and score more consistently."