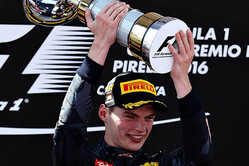 In the same way that one can appreciate why Mercedes and Ferrari were loathe to give Red Bull their engines, especially the works versions, one can understand why the Austrian team allows Adrian Newey to indulge himself in other pet projects.

If allowing him to spend time designing racing yachts, Aston Martin supercars, hair dryers or cat baskets keeps him content and on board, the Austrian racers have to indulge his every whim.

Not taking anything away from Mercedes and that very, very impressive lap from Lewis Hamilton, fact is Red Bull was the star of the show yesterday, and not merely because of the media mania surrounding Max Verstappen.

Considering the power unit in the back of the car, is the same as that which put Kevin Magnussen and Jolyon Palmer fifteenth and seventeenth on the grid, to allow Daniel and Max to grab the second row takes a very special car. A car, which if fitted with a Mercedes engine, would be almost impossible to beat.

Quite what happened to Ferrari yesterday we don't know, and neither does the Italian team. Told that the car thrives in warmer temperatures, some now tell us yesterday was too warm. Whatever the problem, and there clearly is one, Maurizio Arrivabene looked ashen following yesterday's session.

Then again, despite the power the team wield, despite its 'historical bonus' and the right to veto regulations, let's not forget that when Michael Schumacher finally secured the title in 2000, it was after five season of trying. Let's also not forget that he was Ferrari's first world champion in 21 years.

Prior to the arrival of Todt, Brawn, Byrne and Schumacher the Maranello team had spent years in the F1 wilderness, to the point that most of us took it for granted. Slowly, Sebastian Vettel is learning what Fernando Alonso learned previously, Ferrari can be its own worst enemy.

Whilst some believe the Ferraris can make a great start and take the fight to Mercedes today, the German team has looked all weekend as if it has something in reserve, then there is the Red Bull duo.

That said, some, including Christian Horner, fears the Italian team's long run pace.

An error by Williams, or perhaps Felipe Massa, means that Valtteri Bottas is the Grove outfit's sole representative in the top ten, and other than his pursuit of the leading six he can expect to have a fight on his hands with the Force Indias, Toro Rossos and possibly McLarens.

Haas has had a difficult weekend here and will be keen to get the weekend over and done with and get to work on testing, the American outfit being the only team to use both its regular drivers this week.

Renault will look at Red Bull and wonder what might have been, whilst Manor continues to play catch-up and Sauber merely continues...

Although the circuit de Catalunya is not known for producing classics - unless the weather gods opt to intervene - we could well be in for a good race today.

First off there is Lewis Hamilton's need to open his 2016 account and start reducing that gap to his teammate. As we have seen form the last seven races, particularly this year, the new Nico Rosberg is an entirely different beast to that witnessed in Austin last year, and will be in no mood to yield to his teammate.

We have seen what the Red Bull is capable of, and we have heard the relief with which Daniel Ricciardo greeted the news that he had out-qualified his sensational teammate. The Bulls are clearly fired up this weekend and providing they can hold off the red pair they are set to pounce on any mistakes from the Mercedes duo or any bad luck that might befall them.

A team already beginning to look as if it is falling apart will not be helped by the additional pressure coming from Sergio Marchionne who will be present here today. Sadly, we feel it is going to get worse at Maranello before it gets better.

In Sebastian Vettel and Kimi Raikkonen has two star drivers - that goes for McLaren also - and now it needs to buckler down and start acting a little less Italian.

Talking of tyres, and we usually are, the three compounds this weekend are hard, medium and soft.

The hards were only used by Force India in qualifying but seen in free practice. The medium is a strong race tyre, used by Mercedes for the majority of free practice, whilst the soft, the default choice for qualifying, has a notable performance advantage.

A three-stopper is theoretically the quickest way for the 66-lap racex, but that leaves drivers trying this strategy having to pass those who stopped only twice towards the end of the race.

In practice, most drivers will go for the fastest two-stopper: start on soft, soft again on lap 20, then medium on lap 40.

Those trying a three-stopper are likely to start on soft, stop for soft again on laps 16 and 33, then medium from lap 49.

The pitlane opens and one by one the cars head out, Sainz leads the way, but Hamilton is another early riser, the Briton performing a much-needed practice start.

Pirelli sets a last minute power. "There have actually been nine different winners in the last nine races at the Spanish GP. Will that pattern continue?" it asks.

A very late visitor to the grid is Placido Domingo who makes no secret of his desire to see countryman Alonso do well.

As they prepare to head off on the warm-up lap all are on softs bar Haryanto who is on mediums. Hulkenberg, Button, Grosjean, Magnussen, Gutierrez, Palmer, Massa, Nasr and Wehrlein have a luxury of starting on brand news sets.

Hamilton leads down the straight and as he weaves across to block his teammate, so Rosberg weaves across with him. Behind them, Vettel is on the outside, appearing to be ahead of Verstappen who is stuck behind his Red Bull teammate.

In T1 Rosberg goes around the outside of Hamilton to take the lead, whilst Vettel loses out to both Red Bulls and falls back to fifth.

Hamilton tries to pass Rosberg out of T3 on the run to T4 but the door is closed and he is forced on to the grass. With no grip the Briton spins and hits the back of his teammate, both heading off into the gravel. The Briton raises his hands in despair.

Back on track, a superb start and some very brave driving around the outside, sees Sainz up to third, ahead of both Ferraris. Stunning stuff from the Spaniard and bad news for Vettel and Raikkonen.

The Safety Car is deployed as the two cars are removed from the gravel trap.