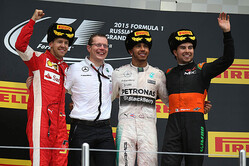 For the fourth time in as many races, the medium, soft and supersoft compounds have been nominated this weekend.

Now in its third year, the Russian Grand Prix at Sochi features a varied and technical track, with a very smooth surface that typically leads to low tyre wear and degradation.

Although the track is now three years old, the asphalt is still evolving and may be different.

With wear and degradation being low, we would not expect a high number of pit stops.

Weather conditions tend to be mild, so thermal degradation is not a big issue.

The most challenging corner is Turn 3: a multi-apex left-hander that recalls Istanbul's Turn 8.

About 1.7 kilometres of the 5.848-kilometre lap are run on roads open to the public.

A high degree of track evolution is expected, as the track is not otherwise used extensively.

Mercedes, Ferrari and Red Bull have gone for a different approach to their Sochi tyre choices.

The Formula 1 Commission has accepted our proposal for more test days to prepare for 2017.

This could be the last daytime Russian GP: a night race is a possibility in Sochi for 2017.

Winner: Hamilton (one stop: started on supersoft, changed to soft on lap 32).

Best-placed alternative strategy: Perez, third (also a one-stopper, but took advantage of a safety car to change from supersoft to soft on lap 12, then ran 41 laps to the finish).

Practically all the drivers stopped only once, with just two stopping twice.

Paul Hembery: "We're back to Russia just six months after coming to the race previously, which means that we can probably expect conditions in spring to be different from how they were last autumn. This is one of the lowest degradation tracks we visit all season, so we can expect to see some quite long stints even on the supersoft, as Lewis Hamilton showed last year. However, the performance increase that we have consistently observed from the 2016 cars will increase wear, so free practice will be very important to get an accurate read on tyre behaviour in these new conditions with the latest generation of cars."