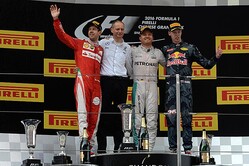 Mercedes driver Nico Rosberg claimed victory from pole using a two-stop strategy in China: one of the most action-packed and challenging races of the year. The majority of drivers used a three-stop strategy: however there were a number of different variations on this theme. Rosberg used a two-stop soft-soft-medium strategy to win: the same as Felipe Massa, who finished sixth for Williams.

A very different strategy was used by Mercedes driver Lewis Hamilton, who climbed to seventh place behind Massa after starting from the back as a result of a technical problem in qualifying, despite making five pit stops.

In total, 13 drivers used all three compounds available, in a strong demonstration of how the latest regulations have shaken up the range of tactics that are possible during a grand prix.

Paul Hembery: "Most teams came into the Chinese Grand Prix, which we were delighted to sponsor this year, with not as much dry running as they would like. As a result, their strategy forecasts were made even harder, but Rosberg and Mercedes made exactly the right calls after starting on the soft tyre: which just goes to show how strategy really starts from before qualifying. Shanghai is one of the most demanding circuits of the year, yet Rosberg's win was achieved with just two pit stops. Behind the winner a wide variety of different approaches were used, underlining how teams are using the 2016 three-compound choice to great effect".