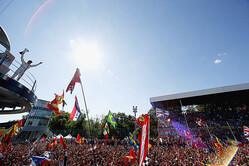 The Italian government is to agree to a law change in order to safeguard the future of its Grand prix at Monza.

With the promoters unable to meet the financial demands of FOM, there has been concern that the Italian Grand Prix might follow France and Germany.

However, a change to the Stability Law, which has been agreed in theory by the government and should be passed in weeks, will allow the Automobile Club of Italy (ACI) to help finance the event whereas under the old system it would only have been able to provide funding with profits from the sport which were difficult to define.

"We have to be clear about the choice we had here," Angelo Sticchi Damiani, ACI president, told Motorsport.com. "do we want the grand prix or not?

"If we wanted the grand prix to stay at Monza then we needed to find the resources," he admitted. "If the money had come from the government then there would have been big controversy, since those resources are supposed to be for solving the country's social problems.

"Now we can say that part of the funding will come from the results of cuts and saving from our budget," he confirmed, referring to the ACI. "Now the ACI can use the profits from its budget and avoid the constraints that would previously have made it impossible.

"All around the world public money is used to organise every grand prix," he continued. "In our case, it will be the sport federation's public money. In other parts of the world, national governments provides public money, because it is unthinkable that every event can pay what Bernie Ecclestone demands."

Asked if this new move might even see the current contract extended, he said: "This is an Ecclestone request. He wants to renew with a long-term contract. This proposal can be interesting and could bring us some extra benefits."