Mateschitz: We still don't know if we will get an engine 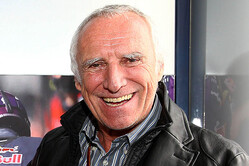 With just one round of the 2015 season remaining, most teams have already turned their attention to next season. For Red Bull, however, there remains one rather significant elephant in the room... it doesn't have an engine.

Despite the various rumours, the claims that Mario Illien is using the (dreaded) Renault engine as the starting point, the fact is that the Austrian team doesn't appear to be any closer to resolving the situation than it did some months ago.

And that's not media speculation, it is the opinion of the man who signs the cheques, Dietrich Mateschitz.

Asked, in an interview with his own publication Speedweek if his teams will be on the grid next season, the Austrian said: "That is a question to which I cannot give a definitive answer, because we still don't know if we will get an engine and what else is planned for the future.

"But at some point even we will have had enough," he admitted.

Ironically, certainly in the eyes of some, the article claims that "Formula 1 is dominated by several large egos", though it opts not to identify them.

Admitting that a stop-gap might well be needed in 2016, a "nameless V6 engine from France", the article makes clear that if the 'alternative engine' does not appear in 2017 Red Bull will say "farewell" to F1.

However, that plan also appears to have faltered today after the Formula One Commission reportedly rejected the idea, a blow not only to Red Bull but to the FIA.

Earlier, the idea was accepted by the F1 Strategy Group, which requires a majority as opposed to unanimous support.

With the FIA and FOM each holding six votes, the six teams on the Strategy Group have one apiece, consequently they can never out-vote the powers that be.

However, when it came to the Formula One Commission, Ferrari and Mercedes are understood to have made their position clear, both arguing that with the proposed independent engine the FIA is effectively forcing the engine manufacturers to agree to its (cost-cap) demands... or else.

If the FIA is determined to go ahead with the independent engine plan it could, despite today's vote by the Formula One Commission, use force majeure to push the issue through, though this would surely lead to even more rancour.