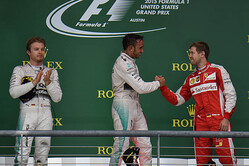 The shortfall is due to changes to the way in which the benefits of hosting the race in Austin are calculated, this in turn following control of such matters coming under the jurisdiction of Governor Greg Abbott’s office, the original deal having been agreed by (then) Governor Rick Perry and state Comptroller Susan Combs.

In 2012, 2103 and 2014, the state paid $25m, but this year, just weeks before the race was to be held it was announced that the subsidy would drop to $19.5m, leading to Circuit of the Americas Chairman Bobby Epstein to famously admit "we're screwed".

Meanwhile, of course, as is the norm, the race hosting fees increase by 10% each year.

Keen to keep Austin, and thereby the United States on the calendar, Ecclestone has done the same as he did with Silverstone, allowing organisers to pay the fees in arrears.

Nonetheless, this doesn't entirely satisfy Epstein who insists the state has gone back on its original deal.

"It’s OK paying after the race, but if they don’t give you enough to pay the sanction fee, you still can’t do it," he said.

"I think we will get the funding back on track again," he added.

With New Jersey effectively dead and buried, at least as we knew it, Ecclestone is keen to see more than one race in the US and recently hinted that he's eyeing a venue in California.