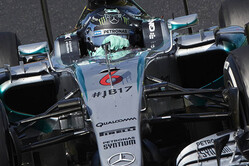 While heavy rain, indeed thunderstorms were forecast, it is quite bright, though there remain some ominous clouds in the distance.

Nico Rosberg topped the timesheets in this morning's final practice session, albeit just 0.014s ahead of teammate Lewis Hamilton. However, it is the pace of the Red Bulls that is of interest, Daniel Ricciardo and Daniil Kvyat finishing third and fifth.

Sebastian Vettel was fourth, however an engine issue for teammate Kimi Raikkonen leaves a question mark over the Ferrari. Indeed, whilst we have enjoyed some incredible reliability since the introduction of the new formula, it's likely that we could see quite a few DNFs tomorrow, the thin air no friend of the new turbo engines.

Grip, or rather lack of it, is also an issue, with almost every driver having a moment at some point or another. Whilst the brand new asphalt is largely responsible for this, the altitude also plays a part as, again, the thinness of the air plays havoc with the aerodynamics of the cars and also results in tops speeds higher than at Monza.

With the top thirteen covered by just 1.001s, we could be in for some surprises, maybe not in terms of the front row but certainly those behind.

Whilst the jury is still out in terms of the revamped lay-out, there's no arguing with the fact that the new stadium section has an atmosphere of its own, especially when, local hero, Sergio Perez is in view.

Tyre choices are medium (prime) and soft (option), the latter being the quicker of the two but, according to some, only good for a few laps.

McLaren's miserable season continues, unable to resolve the "underlying signal problems on his engine" the Briton will not take part in this session. A new gearbox for Raikkonen means the Finn takes a five-place hit.

The lights go green and Verstappen leads the way, Hamilton and Rosberg also among the first to get to work.

Whilst Verstappen posts the first time of the afternoon (23.680), the TV director, unsurprisingly, only has eyes for Perez.

Hamilton posts 20.995 to go quickest, as the Ferrari duo head down the pitlane, both are on softs. Raikkonen thanks his crew for its work on his car during the break.

Another improvement from, Hamilton, the world champion stopping the clock at 20.808.

Despite a lock-up at T13, Bottas goes third with a 21.296. Moments later he is demoted when Ricciardo goes third.

Raikkonen complains that his brake pedal is soft as Rosberg heads out on a set of softs.

Rossi runs wide at T5 bringing out the yellows, albeit momentarily.

Going quickest in the final two sectors, Vettel goes quickest overall with a 20.503.

The only driver yet to use the soft rubber, Hamilton asks what the cut-off will be and whether he needs to run again.

Verstappen complains that Kvyat held him yup in the first three corners.

We lose Alonso, Nasr, Rossi, Stevens and, of course, Button.