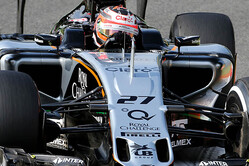 Ahead of today's opening session, the air temperature is 19 degrees C, while the track temperature is 23 degrees. Dark clouds in the distance suggest we may experience some rain later, which is exactly what Sebastian Vettel said yesterday.

However, it's not rain that has the track wet but a "significant diesel spillage" in the second and third sectors which means a delayed start as the marshals and firemen clear the track surface. Indeed, the start of the session is delayed for thirty minutes.

The fact that water is being used to clear the track is particularly worrying, Charlie Whiting paying close attention to proceedings.

With no major layout changes since last year, there are two DRS zones, the first on the pit straight and the second on the long sweep between T10 and T13.

Tyres, like Singapore and other street tracks, are soft and supersoft, though this is a step softer than in 2014.

Other than Jolyon Palmer, who once again takes over Romain Grosjean's lotus, the only other driver change is at Manor were Roberto Merhi gets 'his' car back from alexander Rossi who is racing GP2 here this weekend.

Race Control announces that the session will not be extended and as a result drivers won't get the 'traditional' set of 'free' tyres.

As the marshals leave the track, a Race Control car is sent out, other than the damp patches there is also plenty of cement dust. The session is declared wet however, it might as well be declared void as nobody is going to want to take any unnecessary risks.

Ericsson is first out, followed by Alonso and countryman Sainz. All three sporting Inters.

Ericsson tiptoes through the damp and dusty T8. The overhead shot reveals the diesel leak, which came from a service vehicle, winds its way around much of the track. "What a mess," proclaims Vettel. Gag him!

As Hamilton adds to the cement dust with a great cloud of brake dust, Bottas leaves the pits on full wets. At the end of his exploratory lap the Finn runs wide as he enters the pitlane and has to slam on the anchors.

Rosberg ventures out, the German, on Inters, enjoying sole use of the track. He heads into the pitlane, performs a practice start, and completes another lap. Speaking since Japan, he has admitted that he has suffered since the new start rules were introduced.

Rosberg is eventually joined by Nasr, Ericsson and Alonso, the McLaren sporting lots of flo-vis. Incidentally, the Spaniard, who has the updated engine this weekend, is on softs.

Alonso posts the first time of the day, stopping the clock at 2:00.736. Elsewhere, Rosberg, still unhappy with his practice starts, wants to do another one, but he is told that his clutch is overheating.

As Alonso improves to 53.854, Ericsson complains that "it's really slippery" as he runs wide in T8. The Swede continues and subsequently posts the second time of the day (58.926).

Vettel sends up a great cloud tyre smoke as he leaves his pit slot, the German laying down a nice layer of rubber as he thinks ahead to Sunday.

Ericsson improves to 55.402, despite "bottoming out a lot on the straight".

To add to the fun, Williams, with 20 minutes remaining, claims the first drops of rain are beginning to fall. Ferrari reports that "rain is expected in a few minutes".

Button goes quickest with a 50.920 just as rain is seen to be falling, albeit lightly, at T2.

With the rain still threatening more drivers pour on to the track. Verstappen goes quickest (50.870) but then alnos improves to 49.240.

Vettel runs wide at T8 with teammate Raikkonen doing the same moments later, the finn bringing out the yellow flag.

Suddenly the session has come to life, with the rain still threatening, whereas we had three names on the board we now have twelve.