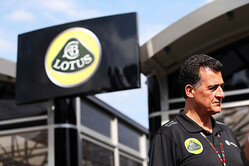 After a Singapore Grand Prix probably best forgotten, Deputy Team Principal Federico Gastaldi is looking forward as well as answering some of the questions of the moment.

The team has just confirmed Pastor for 2016. What can you tell us about this?
Federico Gastaldi: We have an existing multi-year deal with Pastor so it was time to publically confirm he will be driving with us as part of this deal in 2016. Whilst it is true that Pastor has experienced a difficult season in 2015, from working with him we know his strengths very well. This year has certainly been a trying season for many reasons, but Pastor is always positive and always delivering to the best of his ability. He is a pleasure to work with and we will both benefit from the continuity of the relationship continuing into its third season.

What's the current situation with Romain?
FG: We expect an announcement about Romain's future will be made very soon too. It's a case of watch this space.

What's your evaluation of the race weekend in Singapore?
FG: It was a race weekend which showed the depth and strength of character of everyone at Enstone. We struggled for pace early in the weekend but dug deep and were able to fight back. We attacked the race with a strategy designed to work us up the order and go for any points. Ultimately, it didn't work for Pastor or Romain on this occasion, but it is a measure of the team that we never give up.

What can you tell us about developments at Enstone?
FG: Certainly circumstances are forcing us to pursue a rather unusual approach to this season but we're getting near to a resolution. Certainly, we have been subject to an unbelievable amount of scrutiny and it's impossible to speak to five different people in the paddock without getting five different versions of what might be about to happen! There's no point trying to dance faster than the music!

How much is the team looking forward to racing in Japan?
FG: Competitively, we can't wait as it's the first opportunity to put our no points score in Singapore behind us and get back into our championship fight. Then there's the aspect of racing in Japan itself. There is a huge appetite for motorsport so it's really a special experience being there. We have the added stimulus that Honda has re-joined the sport after a period away. Whilst we have all seen they have experienced some growing pains in their first season back, we all know the amazing motorsport history they have and it's good for Japan and good for Formula 1 to have them competing. The Japanese fans are among the most special in terms of their knowledge and devotion to the sport. So it is very important for us to be racing here and also to have a good weekend on the track. The whole nation of Japan gets tuned in to the F1 groove and it is good for the country and for F1. Suzuka is also a great challenge for the drivers and they will be hungry to deliver. Like Spa, Monaco and Silverstone, I don't think anyone dislikes going to Suzuka. It has everything that makes F1 great; an incredible track, great fans and somewhere that the drivers and engineers really learn a lot about the car. For many reasons, we all hope to be able to enjoy a sake after a positive Japanese Grand Prix in 2015.

Technical Director Nick Chester looks at the challenges of Suzuka as well as further afield.

Suzuka is a very distinct circuit - what are the challenges?
Nick Chester: The challenges are the high speed corners. You can't run maximum downforce in Suzuka - as you will end up a little too slow on the straights - so you need to give the driver sufficient downforce to give confidence in the fast twisty bits whilst not clipping their wings down the straights. This is part of the reason why Suzuka is such a driver favourite, as drivers can be absolutely on the limit without the car totally stuck to the ground through maximum downforce. It's not just having sufficient downforce, it's ensuring that this is delivered in a balanced nature. Getting the suspension set-up spot on is essential here too. You need to extract all the grip that's possible from the car.

What were the issues the team faced in Singapore?
NC: Street courses can often be pretty particular in their demands and that's something we saw in Singapore. We knew it wasn't going to be one of the easiest races of the year for us, but we did have to really work hard to get to the best pace we could with the E23. We didn't get the tyres into their working window at the right time early on in the weekend and we also had all the usual street course challenges. Romain - in particular - with his engineers were able to make some subtle and positive changes to get him into the top ten for qualifying which was rewarding for all.

How did the race itself play out?
NC: Both drivers did terrific jobs out on track which is always very pleasing to see, even when you don't get the ultimate result you want. With the pace of the car and the starting positions, we had to try quite aggressive strategies. This was particularly the case with Romain after he lost positions at the start meaning we brought forward his stops to undercut and gain track position. Unfortunately this meant we missed out on a quick pit stop under the virtual safety car at the first stop. We suffered worse tyre degradation than expected on Romain's final stint which cost us in the last few laps. Pastor made up positions from his start but was compromised later on after the damage sustained from Jenson. It was certainly an interesting race and a challenging one on the pit wall.

Pastor continues with the team next year, what does this mean for preparations?
NC: Pastor is a great person to work with and you always benefit from continuity. It's true that for various reasons Pastor's first two seasons with the team haven't been the easiest, so we're looking forward to working with him in what has potential to be a much more settled environment. We'll certainly be looking to have a stronger season in every regard in 2016.

Do you expect Romain will be partnering him again next year?
NC: We know Romain has made his decision and we will all know soon.

The Japanese GP is the second race of a back-to-back pairing; how does that affect preparations?
NC: It does make for a busy week with the added challenge of the crew changing their body clocks to local time after fighting the urge to do that for the night schedule of Singapore. Fortunately, both locations are relatively straight-forward to work in so there aren't additional challenges like you have in Monaco for instance. Our set-up crew is well versed at packing-up and building-up the garages and rest of the infrastructure we have, but certainly they have busy few days with the back-to-backs.