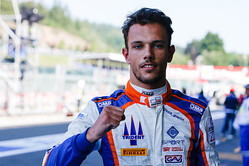 They are running out of superlatives for series leader Luca Ghiotto: The Italian blazed to his fourth pole position of the season, his fifth of his career. His best laptime of 2:04.943 was one tenth faster than ART Grand Prix's and Mercedes backed Esteban Ocon. Marvin Kirchhöfer was third fastest, with the leading trio in the Drivers' Standings taking the top three spots in qualifying.

It was another warm day at the Spa-Francorchamps Circuit, with the drivers keen to achieve the first pole position since the summer break. Kirchhöfer was first to lap in the 2m06's, quickly followed by teammate Ocon. Jenzer Motorsport's Matheo Tuscher was next to top the pile, with Ghiotto up to second at the midway point.

Kirchhöfer returned to the top of the timesheet, until Ocon bettered his time by a mere 0.059s. Almost the entire field returned to the pitlane for new Pirelli rubber with the exception of Carlin's Jann Mardenborough. The Brit had the track to himself and it appeared to have paid off at that point as he clocked the second fastest time, 0.007's off the Frenchman in P1.

After recording the quickest time yesterday in Free Practice, Ghiotto clearly had the pace to challenge for pole and the Italian was first to dip into the 2m04's, with a three tenth advantage over Arden International's Emil Bernstorff.

Carlin and Ferrari Academy Driver Antonio Fuoco moved up to third, before Ocon split Ghiotto and Bernstorff as the clock ticked down. As the chequered flag came out, Kirchhöfer was on his best lap, lighting the timing screens purple. The German moved up to third as the session drew to a close.