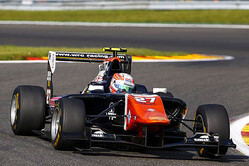 Luca Ghiotto made his intentions clear for the weekend by posting the quickest time in the forty-five minute Free Practice session at the Spa-Francorchamps circuit. The Series leader picked up where he left off in Budapest to leave his rivals in no doubt of his speed and determination for Round 5 of the 2015 GP3 Series season. Carlin and Ferrari Academy Driver Antonio Fuoco was second, ahead of Jenzer Motorsport's Ralph Boschung.

A track temperature of almost forty degrees greeted the GP3 drivers in unusual weather conditions for the Belgian circuit set in the Ardennes. There was one change to this weekend's driver line-up; Dutch driver Beitske Visser joined the Trident squad after completing one round of GP3 back in 2014.

Ghiotto was first to lap in the 2m07's, whilst Carlin's Jann Mardenborough who had set the initial pace had a moment after running wide on the Eau Rouge kerb which sent his car airborne. The Brit was able to continue his session.

After twenty minutes, Ghiotto was fastest by over half a second, clocking the best time in all three sectors. Fuoco, Arden International's Emil Bernstorff, and Mardenborough completed the top four. Once the drivers pitted for new rubber, the timing screens were set alight and it was the Trident trio who topped the standings.

Newcomer to the Italian squad, Visser, was up to P2, before Ghiotto and then Artur Janosz displaced her to third. Campos Racing's Alex Palou was also on the move and the Spaniard jumped up to third fastest, before Jenzer Motorsport's Pal Varhaug rose to P1, first to lap in the 2m06's.

The Jenzer Motorsport squad then repeated the form of their Italian rivals to lock out the top three positions with Matheo Tuscher and Boschung close behind their Norwegian teammate. Ghiotto's pace was looking ominous and the Trident ace soon reclaimed P1 by over four tenths as the clock ticked down as he recorded the fastest time in both sector two and three.

Ghiotto was not done yet and improved again on his next lap to increase his advantage to over six tenths. As the chequered flag came out, Fuoco found some extra pace to rise to second and reduce Ghiotto's margin at the front to three tenths.

Ghiotto took pole position here in 2014 on his debut in GP3 and the Italian will be doing all he can to repeat that this year.