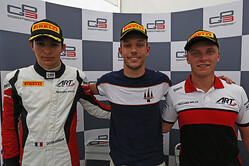 Luca Ghiotto held the lead in a commanding win to see off the advances of Esteban Ocon.

Despite mounting huge pressure on the Trident driver, the Frenchman’s charge was paused after a collision between Zaid Ashkanani and Jann Mardenborough forced a safety car period.

At the restart, Ghiotto pulled out a gap to maintain his lead whilst Marvin Kirchhofer made a bold move on Emil Bernstorff to claim third place at turn two.

Despite countless efforts, Ocon could not pass Ghiotto who gave a masterclass in how to defend a lead. The top six were covered by just six seconds though no overtaking manoeuvres could hold together. Because of that, Ocon remained in second ahead of Kirchhofer and Bernstorff.

Matt Parry and Jimmy Eriksson gave their all in a bid to sneak ahead of the Arden pilot but failed to do so and thus settled for fifth and sixth.

Pal Varhaug and Matheo Tuscher complete the top ten. Mitch Gilbert, Seb Morris and Ralph Boschung narrowly missed out on points finishes despite great battles between themselves and others.