"We didn't imagine that it would be this hard," admits Honda boss 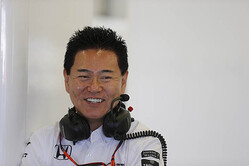 Asked to summarise the first half of the 2015 season, Honda R&D's Chief Officer of Motorsport, Yasuhisa Arai, admits: "It has been a really tough start to our Formula One return. We have had a lot of issues to contend with, not only during the first few race weekends, but also during pre-season testing.

"Thankfully most of those issues have now been overcome and we can start concentrating on moving forward. We are definitely feeling more positive about the second half of the season."

Asked in which areas Honda has specifically have you struggled, he says: "We believe that our compact power unit layout will prove to be very competitive; however we knew from the start that it would cause problems with heat rejection. We now know which area is affected, and in the second half of the season we will apply new parts to resolve the issue and apply more horsepower to improve our competitiveness.

"Expectations were always going to be high because of our illustrious history with McLaren," he continues. "Most of the fans have a great image of McLaren-Honda's heritage so they expected us to return to Formula One and be competitive immediately. Obviously this has not been the case. The sport has changed immensely since the McLaren-Honda 'glory days'. The current technology is much more sophisticated and it is tough to make a good racing car. We knew it wouldn't be easy, but perhaps we didn't imagine that it would be this hard.

I certainly didn't imagine technology wise what we would be facing, but I have complete confidence in the direction we have taken with our power unit. We needed to create something radical in order to beat the top teams, and that is our ultimate goal – to beat the best."

Asked which area of the technology is not what Honda expected, he admits: "The current regulations of the whole power unit package are very complicated so one small component triggers a domino effect of other items leading to the issues that we have been seeing.

"Let me put this concept of the domino effect into a technical example: if you try to harvest energy using the MGU-H, it puts a strenuous workload on the turbo. When the turbo is under stress, it cannot do what it is supposed to do, which is to force more air into the engine, thus leading to decreased power output. This is the result of one component working against the others, instead of working together.

"These types of technical chain reactions, which lead to vehicle stoppage, were definitely more than we calculated, or more than we envisioned. The difficulty with this is that you cannot calculate precisely without running the car in actual conditions, on track."

So what can we expect to achieve during the second half of the season?

"First of all, Hungaroring was a small turning point for us from a technical point of view. Our engineers worked very hard to maximise the power out of the hardware we had at the track, through energy mapping and deployment suited to the track and the driving characteristics of the two drivers. The Hungaroring is a busy circuit for the power unit, with undulations that require constant power adjustment at every corner and it is not as easy to do as it sounds. However, going into the second half of the season, knowing that we are progressing is reassuring.

"I am confident that our reliability problems are now behind us which means we can turn our attention to increasing power. After the summer shut down our plan is to apply a new spec engine using some of our remaining seven tokens.

"The most important area for us to concentrate on is the combustion. Current regulations require high efficiency of the combustion so we want to change the characteristic with the chamber design and intake and exhaust system layout. Another issue we will be addressing is reducing mechanical friction by changing the gear train system along with the combustion.

"Not all of our upgrades will be in place for the Belgium Grand Prix; some parts will be applied for Spa and the rest during the weeks that follow. Our plan is to keep improving race-by-race for the remainder of the season.

Asked about talk that there are issues within the McLaren-Honda relationship, he says: "Every step of this new project has been discussed with McLaren management. Every day we are in discussion.

"I know that they are under pressure from sponsors, but we trust and help each other to come up with good, innovative ideas. Working with the two different cultures within the team has made us stronger and more creative. It's a very good relationship and a very good team. I trust everyone in the team, and we wouldn't be McLaren-Honda without each and every one of them. We wouldn't be fighting as hard as we are without their support and hard work.

"We are one team which means McLaren puts 100% into their job, and so does Honda. The fact that sometimes we are colliding means were putting 100% in everything we do and both sides of the partnership are extremely passionate – this is positive not negative.

"We are already focussed on 2016 of course, but we are still concentrating on second half of the 2015 season too. We value 2015 as much as 2016 because the regulations will remain the same. This means we can develop an idea for 2016, and if it works we can implement it in 2015.

"Unfortunately we will have more penalties during the coming months, but you will also see big improvements from both sides – chassis and power unit. After Spa we aim to improve every race, and hopefully we can start fighting for podiums. We will never stop fighting in 2015!

"Formula One is the pinnacle of motorsport that involves many different people with many different talents. It requires a team. Everything else except the skill of the driver is down to the team. It's not down to one person or one item.

"Moving forward I hope that their hard work gets more focus, rather than one person or one comment being in the spotlight. Of course there is a lot to talk about in Formula One, but it is the team members that give their all and they should be praised for their hard work.