US and Qatari investors in bid for F1? 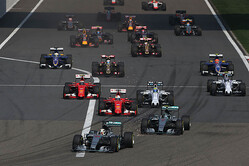 It is understood that a joint bid by American and Qatari investors could see CVC sell its stake in F1.

The bid involves Qatar Sports Investments and RSE Ventures, the company founded by billionaire Stephen Ross, owner of, amongst other things, the Miami Dolphins.

The bid, which it is reported could would be worth up to £5bn would be for CVC's 35.5% stake in F1, the money the private equity fund having reaped from F1 over the years having been described as one of the most profitable acquisitions in business history.

The new deal would see Bernie Ecclestone sell his 5% stake in F1 but it is believed the potential new owners would want to retain the services of the Briton.

Bernie Ecclestone claims that while there are "three or four" potential purchasers there are are currently no firm bids on the table, though it is believed such a move could be just weeks away.

"I have no idea whether any of these people have got closer with this, but CVC are in the business of buying and selling companies," he told The Times. "They are very happy with F1 and Donald (Mackenzie, CVC's chairman) is not an enthusiastic seller, but their business is selling and everything has a price."

Whilst some will be dismayed at the thought of another high profile acquisition by the Qataris, fact is there is little love in F1 for CVC which has reaped huge financial rewards whilst investing nothing in the sport.

Indeed, looking at the current state of F1 it is fair to say that the private equity fund has overseen the decline of the sport whilst filling its own coffers.

Buying the sport would at least solve Qatar's desire to host a Grand Prix of its own. Currently, Bahrain, the first country in the Middle East to host a Grand Prix has the right to veto any new events in the region, a right, according to Bernie Ecclestone, it has exercised.