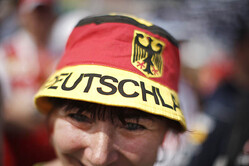 Nico Rosberg has admitted his sadness at the possibility of the German Grand Prix being dropped from the calendar.

The German, who finished third fastest today having added another 151 laps to the Mercedes W06's tally, is concerned that his home race is under threat due to money concerns and falling interest in the sport despite the country's strong presence in the sport.

"I recently heard about the discussions concerning the German Grand Prix and it's really sad for me and the German fans to hear that nothing is confirmed yet for 2015," he said.

"For as long as I can remember, the German Grand Prix was part of the Formula One World Championship, so I really hope our Grand Prix will be held this year and beyond that.

"The fans deserve to have a great show every year because there are so many great supporters out there. Also there is plenty of Germany in F1, with us German drivers like Sebastian, Hulk and myself, plus of course Mercedes-Benz. So I really hope that Bernie and the promoters find a good solution for everybody."

Speaking earlier, Bernie Ecclestone, who does not hold out much hope for the race, admitted that time is running out, with a final decision possibly by the weekend.