Still no agreement on German GP 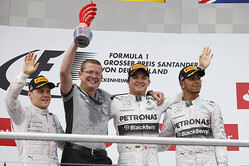 Just over two weeks before pre-season testing gets underway, the fate of the 2015 German Grand Prix remains undecided.

With the event currently alternating between Hockenheim and the Nurburgring, this year's race is scheduled to take place at the latter. However, due to ongoing financial concerns the contract has yet to be agreed with Bernie Ecclestone's FOM.

Whilst the new and recent additions to the calendar are usually funded by the host government, many of the European circuits have to raise their own money, and the ever increasing hosting fees are making this less and less viable.

The CEO at the Nurburgring, Carsten Schumacher, has warned that whilst he is eager to keep F1 at the venue the sport must remain affordable.

As negotiations with Ecclestone continue, it is feared that the current pricing structure, which includes annual increments, is slowly but surely causing European promoters to turn away from F1, leaving the sport for those nations that have the cash, if not the passion, to step in.

While Mexico is a welcome return to the calendar this year, there remains scepticism as to Azerbaijan hosting a race in 2016, especially as the event will be run as the Grand Prix of Europe.