Formula 1's drivers, team principals and its boss Bernie Ecclestone have joined together again in their support of the 2015 Zoom charity auction. Held in association with Nikon, it is the third annual event in aid of Great Ormond Street Hospital Children's Charity.

Throughout a memorable and tense 2014 season, the stars of the sport were each asked to take a photograph that represented a snapshot of their world. The results - all exclusively signed by the participants - will be auctioned by Coys during a star-studded gala evening at London's Intercontinental Park Lane on Friday 16 January.

The Zoom initiative, which benefits Great Ormond Street Hospital Children's Charity, gives fans a unique insight into the lives of those most closely involved in the sport.

The drivers and team principals have all taken part including leading figures from Lewis Hamilton (top right) and Nico Rosberg to Adrian Newey and Christian Horner. The result is a set of stunning images, covering subjects as diverse as Jenson Button's view (middle right) of his 'office' to Toto Wolff's on-the-grid selfie (lower right) in Bahrain and the unusual art occupying Bernie Ecclestone's back garden.

In addition to these original photographs, bidders will find nine Nikon COOLPIX S9700 cameras amongst the lots donated by the event sponsors Nikon, each signed by a legendary Formula 1 World Champion including Niki Lauda, Jacques Villeneuve, Mario Andretti and Sir Jackie Stewart.

Suzi Perry will return to host this year's Zoom auction. As the face of the BBC's F1 coverage, Perry is regularly pit side interviewing the biggest names in the sport and was recently praised for her work as 'impossible to fault'.

"I'm delighted to be back for a second year," she said. "This is an amazing event, an opportunity to buy one off pieces signed by racing heroes, whilst raising money for such a great cause." 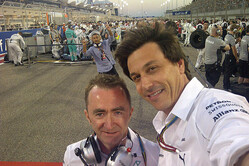 Once again we would like to thank the teams and drivers, Bernie Ecclestone, the other participants and all our partners for their support," added Christian Sylt, co-founder of Zoom. "We are looking forward to building on the success of the two previous events to raise more money for Great Ormond Street Hospital Children's Charity through the auction of these unique images and the cameras which Nikon has kindly donated."

"We're delighted to be supporting the Zoom initiative for another year," said Jeremy Gilbert, Group Marketing Manager at Nikon UK. "It's a fantastic project that both raises money for an incredibly worthy charity and opens up the world of Formula 1 to fans through imagery, offering an exclusive perspective of the sport with behind the scenes images."

"We're delighted to be working with Zoom again this year on this exciting project, which brings together our supporters in the F1 community," added Olivia Jary, Head of Business Development at Great Ormond Street Hospital Children's Charity. "The money raised will make a real difference to patients and families from across the UK. We'd like to thank Zoom and the F1 community for their continued support and generosity."

Each contributor supplied a caption to go with their picture:

Hamilton (top) writes: Let life flow like a river, follow the path it takes you down. Take it as it comes & whilst you learn along the way, may you help guide the flow in the direction of your dreams.

Button (centre): I have the best job in the world - and this is my office!

Toto Wolff (bottom): It's a selfie from the most dramatic race of the year, Bahrain, and has a rather prominent photobomber - the promoter of the Malaysian GP!