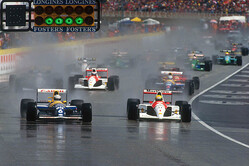 Imola boss Pietro Benvenuti admits his fears for the future of F1 in its European heartland.

Of this year's twenty scheduled Grands Prix, only eight will take place in Europe, traditionally the heartland of the sport. Of course, that's assuming the German Grand Prix still goes ahead.

To add insult to injury, next year sees Azerbaijan added to the calendar, and despite the fact that many perceive it as being in south western Asia, over a thousand miles east of Istanbul - which marks the historical point where Asia meets Europe - will host the Grand Prix of Europe, a race previously held by circuits such as Brands Hatch, Donington, the Nurburgring and Jerez. You know, tracks actually in Europe.

The fact that Bernie Ecclestone connives to have new additions to the calendar scheduled in order to maximise the TV audience in Europe is clear proof that - despite the sport's seeming best efforts - the fan-base remains strong. Which poses the obvious question, 'why is F1 forsaking its traditional heartland?'

The answer is just as obvious. Money.

Fact is, being in private hands and with no government backing, or any other kind of benefactor, the European circuits are struggling. Ever rising fees mean that ticket prices are high which means that, certainly in these difficult times, less fans are able to afford them.

No such problems for many of those new additions to the calendar, where wealthy governments are falling over themselves in order to have the 'prestige' that F1 will afford them.

Clearly not having learned the lessons of India or Korea, to name but two, governments continue to fall for Bernie's snake oil, confident that F1 will finally put them on the map and have the world's beautiful people banging a path to their door.

It's a prospect that frightens Pietro Benvenuti, the general director at Imola, a circuit forever linked with the horrors of 1994, but which between 1981 and 2006 hosted a number of great Grands Prix.

"Currently, there are no capable venues to afford the costs to host a Formula One race without the support of governments or wealthy sponsors," he told Italy's f1web.it.

"I think the entire F1 world must be changed, taking into account that the economic conditions have changed," he warned. "Otherwise, the risk is in losing the historical venues which created the myth of the sport."

Of his own country's round of the championship, which is also under threat, he said: "Italy cannot lose its Grand Prix. Though clearly, the situation is very tough."

Whilst there is talk that Monza is now considering the prospect of life without F1, fearing that the cash demands will drain it of resources for other forms of racing, Benvenuti revealed that the sport could still consider Imola.

"Last June, Charlie Whiting inspected the circuit. He confirmed a Grade 1 license until June 2017. This means the Autodromo Enzo e Dino Ferrari complies with all the technical requirements to host any FIA race, including Formula 1."

Sadly, whilst it might meet all the technical requirements for F1, the Autodromo Enzo e Dino Ferrari, like so many others in Europe, cannot come anywhere close to matching the financial resources of the likes of Azerbaijan or Qatar.

Interestingly, while Ferrari enjoys numerous privileges due to its 'historic 'status', no such luxury is afforded circuits, some of which have were hosting motor racing long before the Scuderia came into existence.