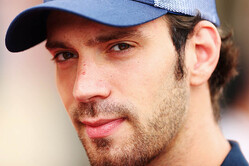 Jean-Eric Vergne has been thrown an unexpected F1 lifeline by Ferrari, as the Frenchman is recruited as test driver.

Days after the Maranello outfit announced that Esteban Gutierrez would be the new test and reserve driver - subsequently revealing a new Mexican sponsor - the team has announced that Jean-Eric Vergne is to join the Scuderia in the role of test driver to work on car development in the simulator.

"On behalf of the entire team, I welcome Jean-Eric, who I'm sure will make an important contribution to our development work in the simulator," said Maurizio Arrivabene. "He will fit in to a programme aimed at improving important areas, invigorating and strengthening an already strong and capable group of professionals."

"I feel very honoured to be joining the Ferrari family and becoming a part of the most prestigious team in the history of Formula One," added Vergne. "The objective is a unanimous one and that is to help the Scuderia get back to the top step of the podium.

"Having had two years working in the simulator for a top F1 team and three years racing with Toro Rosso, my experience will add to the great efforts that are currently being made in order to get the team back to its winning ways. I look forward to fulfilling my dream in becoming a member of Scuderia Ferrari and having the Tifosi behind me every step of the way."

The entire driver line-up therefore consists of the race pairing of Kimi Raikkonen and Sebastian Vettel, along with third driver Esteban Gutierrez, while Marc Gene and Davide Rigon are confirmed in the role of test drivers. Pedro de la Rosa leaves the team at the end of the year.