A difference of opinion at Caterham? 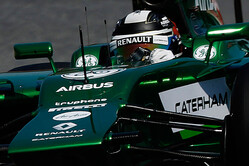 It's fair to say that since the buy-out of Caterham by a mysterious Swiss/Middle East consortium, the relationship between the Japanese and his team has deteriorated, a situation not helped when he was replaced by Andre Lotterer for the Belgian Grand Prix weekend.

Retiring from the Russian Grand Prix, Kobayashi initially suggested that the team had effectively ordered him to stop in an attempt to save mileage, i.e. money, however, by the time the post-race press release was issued it appeared the 28-year-old had been suffering a brake issue.

Such was the concern over Kobayashi's claim that team boss subsequently attempted to 'clarify' the situation.

"I was very surprised to hear Kamui referring to some mileage-saving instruction coming from the team's management," said Manfredi Ravetto. "We saw via telemetry that there was a potential issue with the brakes and we decided to avoid any risks; Kamui officially confirmed this as well and I'd like to add that he had also asked us to change the previous set before qualifying because he felt some vibration.

"Yes, we instructed Kamui to retire because the safety of our drivers is our first concern," he added. "Regarding Kamui's comment, all I can say - and again, I'm answering with facts - is that the team has continuously made progress since the British Grand Prix, we've managed to qualify very well in the last two races, getting very close to Q2, and in Suzuka we repaired Kamui's heavily damaged car in time for the next session without any problems, so I cannot understand his comment."

"Scary!" he wrote, referring to repairs that had been carried out to his car on Friday night following the opening practice sessions. "Last night a suspension defect was found. There's no spare so it was repaired by wrapping it in carbon. It's checked all the time but, even so, being asked to race like this is too scary! I want to go home already.

"From here on there are still practices and the race to go," he added, according to BBC Sport. "I'm seriously troubled. As a racing driver, should I drive? Should I safely decline? I drive again in 15 minutes…"

Remember, this was just seven days after Jules Bianchi's crash at Suzuka and therefore at a time of heightened awareness in terms of safety.

According to BBC Sport, Kobayashi's manager, Chikara Funada, has confirmed that the Facebook post is genuine and written by the Caterham driver, but added that it was on a personal account intended to be seen only by friends and family, and not for public consumption.

"On that morning, Kamui was informed of a certain issue by the team," said Funada. "He immediately told me what he just been told and we told the team our concern. In the end, the team cleared the concern which we had in our minds.

"This comment was Kamui's immediate reaction when he heard about an issue, which he meant to say only to his close friends and families as this was on his private account."

Revealing that Kobayashi was "shocked" his comment had been made public, he said the Japanese is currently preparing for next week's race in Austin.

According to BBC Sport, Caterham admitted that a "small inconsistency" was found on the left rear suspension of Kobayashi's car after FP2.

"It was extensively evaluated at Sochi and Leafield and ultimately a carbon-fibre wrap was applied to provide additional reinforcement, a normal procedure," said the team. "The component was signed off as safe and re-checked between each subsequent session, to be absolutely sure there was no issue.

"Kamui withdrew the post mentioned and drove the car in this form throughout the rest of the weekend, with no hint of any other problem with the suspension."

How this, combined with the 'misunderstanding' following his subsequent retirement from the race affects Kobayashi's relationship with Caterham in Austin and beyond remains to be seen.