Dennis in no rush to finalise line-up 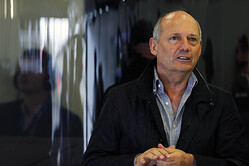 McLaren boss Ron Dennis is waiting to see what develops elsewhere before finalising his own team's line-up for 2015.

While the 67-year-old, like most team bosses wants to finalise his line-up as soon as possible in order that attention can be focussed on the new car, he is aware that outside influences could come into play.

Though many believe Jenson Button and Kevin Magnussen have done a good job, based on the limitation of the equipment at their disposal, Dennis will be aware that at any time there could be a major upset elsewhere, most notably Mercedes. Consequently, the Woking veteran wants to see how things play out for his protege Lewis Hamilton in the coming weeks before rushing to get either one of his current drivers to put pen to paper.

"We always have the best available drivers," he told reporters in Monza. "Without being derogatory, detrimental or negative to your existing drivers, the first thing you have to establish, before you have any process of selection, is who is available.

"No-one could have predicted the tension inside Mercedes-Benz, or imagine a range of scenarios that could see one of those drivers on the market by the end of the year," he continued. "That does not mean we would automatically reach for that driver, or any other driver, in preference to what we have. What it means is you are trying to understand who is available, and then you make a decision. It could be that decision is not to change.

"That's because stability, as we go into the relationship with Honda, has huge value, and loyalty is very important to me too," he added. "So as for a decision, it certainly won't be in the next few days, and it won't be at the end of the season, it will be something in between."

Whilst the wait will be hard on his current drivers, particularly Button who knows that his options are limited, Dennis was quick to pay tribute to them.

"I am a huge fan of both Kevin and Jenson," he said. "Kevin has done an amazing job and I have apologised to Jenson for the distracting elements of where we are at the moment.

"But we've always tried to understand driver availability, and at this moment there is no decision to take," he added. "All I'm doing is making Kevin and Jenson completely aware the best thing they can do is their best job and not get distracted by the whole thing. There is nothing to be distracted by."