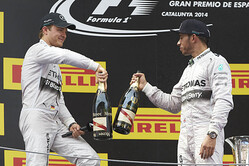 Having had his own fair share of 'internal team strife' Mark Webber predicts further problems for Mercedes.

His relationship with teammate Sebastian Vettel is the stuff of legend, and whilst Red Bull tries to keep a lid on things, as much as possible, Webber knows that once the rot sets in - once a teammate appears to be treated more favourably, once a teammate breaks an agreement, once a teammate compromises your race - things will not get any better.

Therefore, now enjoying the team sport that is the World Endurance Championship, the Australian can look at the situation at Mercedes from a unique perspective.

"This is not just about one incident in one corner," he told the Herald Sun. "Obviously this whole situation has been brewing like it always does inside the teams and you've got two guys fighting for victories. You don't generally have trouble with teammates fighting for third, fourth, fifth... but when all of a sudden the wins are coming, it's not easy for the team to manage."

Reflecting on the incident that sparked the latest 'war of words', Webber says: "It's a passing move. Nico is trying to have a look on the outside, but it's Lewis's corner. Nico knows he has no chance to get the move done. It's strange that he tried to come in so tight behind Lewis. That was a little bit uncharacteristic of Nico, not normally his style, but he made contact. It wouldn't have been a big deal at all, it would have been nothing if there was no puncture, but the puncture changed the whole race. In the end both of their races were in trouble.

"Now we have a very difficult situation at Mercedes where the drivers are not enjoying a good relationship," he continues. "It's going to be interesting, not just for the rest of this year but can they drive together in the future? Is it okay for 2015 for the team to have the two guys together?

"The thing is, who is now going to try to put this back together? Is it the people who pay Niki's and Toto's wages? Because at the end of the day, if the drivers are not listening to these guys, do they have to say, 'Lewis and Nico, you go chat to the big guys at Mercedes, because they're paying you guys to get the job done in a team environment.'

"At the moment it's not a team, it looks like the drivers are doing their own thing," he concludes.

With the team seeking to manage the situation behind closed doors, away from the media spotlight, Webber warns that no matter what is done or said in the coming days the situation will most likely kick off again when the fight for the title resumes at Monza just over a week away.

The tough thing is for the drivers to stay focused on driving the cars now, because for them it's going to be a nightmare," he says. "The Thursday, the Friday, all the stuff out of the car, the media... and this will just keep going up."

"When they get to the track, they'll only be thinking about each other. There's no-one else really in the race," he adds, referring to the fact that - much like his situation at Red Bull with Vettel, because Mercedes doesn't have any direct competition it is the two teammates who must constantly go head-to-head.