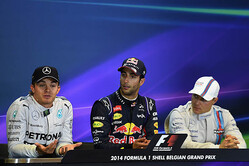 What a race. Exciting? You loved it? What about this man here? Let's hear it for him. Daniel, if I have to say to you: you are responsible for keeping half of Australia up until this hour!
Daniel Ricciardo: Yeah, I think obviously back home there is a huge following, but this is nearly as many Australian flag as there were in Melbourne. It's impressive, a lot of Aussies or at least Aussie fans out this weekend, so thank you very much.

We saw you for the first time… because with the previous two wins you just happened to get in there in the last three or four laps. This time you led from the front. Different task, different pressure? What was it like?
DR: Yeah, definitely a bit different. When you lead the race, I guess, for that long it's more about composure, just looking at your lap times, just trying to be as consistent as possible and once I heard Rosberg came in for a third stop we knew he was going to be quick at the end, I just had to try to keep the lap times up and keep it clean.

We'll be back to you, please don't go away. I've got to ask: where is the man? He's here - Nico Rosberg, ladies and gentlemen! (Responding to boos from the crowd) Hey, come on guys, steady on, steady, steady, Nico drove an unbelievably good race. Nico, I've got to ask you the all-important question: what happened up in Les Combes?
Nico Rosberg: Well, I got a good run on Lewis and tried to go around the outside and yeah, we just touched in the end, unfortunately, so that hurt both of our races. From a team point of view of course that's very disappointing. And yeah, that's the way it is.

Not that this is a question of apportioning blame but did you see blame either way or was it just a racing accident, a 50/50 situation?
NR:I haven't seen it yet. It wouldn't be good of me if I would comment now. I need to look at it on TV and then I can comment afterwards.

We know that you have a lot of fans here but there are obviously a lot of Lewis fans here. I'm just thinking myself about Mercedes. The one-two was there obviously, the domination of the qualifying. Did you actually think it would be a one-two today?
NR:I was pretty confident, yeah, because we had very good race speed, as you saw at the end there, but unfortunately it didn't work out for us today.

Nico, our championship leader. Ladies and gentlemen, Nico Rosberg! (Responding to more boos from the crowd) Hey, guys, come on, come on. That's not fair. You know it's not fair. He's driven his heart out, like everyone of these three guys and everyone on the grid. I think he needs and deserves a round of applause. Thank you.

Valtteri, you're making a bit of a habit of this aren't you. We're going to have to make a special place for you up here. Four podiums out of the last five races, what's going on?
Valtteri Bottas: Yeah, why not? The team has done such a good job, we are definitely on the right way: another podium, the fourth one in my career and the fourth one this season. We are still chasing for the highest step but for now, for this season, if we keep like this, it's OK because it's the future that matters.

The highest step: how far do you think you're away from that, because Williams have got a really great turn of speed? Can you just get that little final extra piece?
VB: I think this season it's going to be difficult. We definitely need to be lucky to achieve that. Mercedes is really strong and even on a track like this Red Bull was really, really quick, we couldn't really challenge Ricciardo, so we have still work to do but we are on the right way.

Daniel there's a lot of flags, a lot of well-wishers here for you. Your third win of the season. Just tell everybody here what was it like for those final couple of laps, just as you must have known that Nico was closing in on you. What was going through your head?
DR: The first thing obviously that you hope everything holds together. You hope mechanically everything gets you to the finish line. Then it's just trying to hit your marks and keep consistent but always the last few laps the chequered flag can't come quick enough.

Daniel, you're a three-time grand prix winner now. Obviously the passes early on in the grand prix on Alonso and Vettel were fundamental in setting up the platform for the win today and from there obviously you had to cover Nico off for the rest of the race but tell me, did the boy from Perth always dream of a Spa win?
DR: Yeah, I guess so. You dream of… there's definitely a few on the calendar that stand out more than others and Spa is one of them, but to be honest any win is special in Formula One. Yeah, the first part of the race: we had pretty good pace. On lap one I actually had the inside of Alonso at five but then I locked up and went off so he got me back and then we were able to get in front a few laps later. And then Seb, looked like he just dropped a wheel on the astroturf exit of Turn 10 and obviously with the rain overnight and this morning it was still a bit slippery, so I was able to get him and then I think Nico came in for a front wing change and we were able to get into the lead and then the pace was pretty good. We were happy with what we were doing and the consistency was there and we were making the tyres last. Yeah, it was just really up to me at the end to stay consistent and stay focused. Yeah, it was good fun.

Nico, obviously there is only one real talking point for you at this stage: the incident with Lewis early on in the grand prix. We've obviously seen the crowd's reaction to it. In making history and fighting for championships there are always going to be difficult moments. This is your chance to explain how you saw it.
NR:To be honest I'm not in a position to comment on it at all because I haven't seen it and, in the heat of the moment… I need to see it on TV before I say an opinion or anything as such. Of course very, very disappointing from the team's perspective, for sure, because we could have done a lot better than just finish in second place, y'know, with the car that we have, because our car is really… has been very, very special this weekend.

Valtteri, your fourth podium in five grands prix, quite a streak for you. And a similar story really, a recovery for you after quite a disappointing qualifying session, I imagine, yesterday.Starting sixth on the grid and, again, some big overtakes in the story of your race today.
VB: Yeah. It was, again, a really nice race, nice to be in it. Obviously yesterday the weather played a role in the qualifying and we knew that in the dry we would have better pace than in the wet, so we were really hopeful for today. I have to say that we are little bit surprised by the pace of Red Bull and Mercedes. They were quite a bit far away. Of course our race was a bit compromised after the poor start. I was quite a long time stuck behind some other cars and couldn't really go at the pace we had. But yeah, had some good overtakes. We had good pitstops and good strategy by the team and that allowed us to come up a few places and again to the podium.