Rosberg: It was a "racing incident" 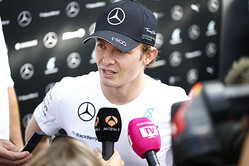 Whilst Mercedes tries to keep a lid on its driver spat, Nico Rosberg admits "regret" but insists Spa clash was a "racing incident".

Not for the first time, the beautiful, usually tranquil Ardennes witnessed all-out war, though this time around it was F1 cars as opposed to tanks.

Its post-race meeting resolving nothing, indeed seemingly adding further fuel to the fire, Mercedes has opted to allow its drivers a couple of days in which to cool off as the German team attempts to quell what is rapidly turning into a PR disaster... after all, at some point a decision will need to be made which is going to seriously annoy at least one of its drivers and his fans.

An official post-race video from Rosberg tells us nothing, the German doing what he did for much of the weekend, saying he preferred to keep opinions and thoughts within the team, behind closed doors.

However, writing on his Facebook page, the world championship leader admis... "That was a tough race.

"We had the pace to win today but the incident cost us a top result," he continues, "so I'm really disappointed because for the team it was a bad day.

"As drivers, we are here to entertain and to show the fans a good time, so our duels are always on the limit.

"I regret that Lewis and myself touched," he admits, "but I see it as a racing incident - just as the stewards did. I was quicker down the straight and went to the outside as the inside line was blocked. I gave it a go and, after we touched, I realized that my front wing was damaged and thought that was it. In the next second I saw that Lewis also had a problem, which was very unfortunate for him and for the team.

"We sat down quickly after the race but there will be some more meetings to be held in to avoid races like today."

Elsewhere, Hamilton, who has said that at the post-race meeting Rosberg admitted deliberately hitting him in order to make a point, a claim that Toto Wolff denies, saying the German driver's comment has been misinterpreted, insists that his teammate went into the weekend still seething from what happened in Hungary.

"It's interesting because we had that meeting on Thursday and Nico expressed how angry he was," said the Briton, according to Reuters. "I was thinking 'It's been three weeks and you've been lingering (on it)?!'

The Briton also suggested that Rosberg could not be trusted, even though the German does not have history of recklessness.

"When you're out there you have to trust people to think with their heads and not do things deliberately," said Hamilton. "But after that meeting I don't really know how to approach the next race. I'll have to make sure we're not wheel-to-wheel."

As for the official team video from Rosberg...