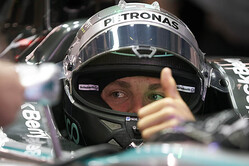 The move follows Lewis Hamilton's claim that at a post-race meeting the German said he had deliberately hit him to "prove a point", a comment Mercedes Motorsport boss Toto Wolff subsequently said had been misinterpreted by the Briton.

Whilst Mercedes attempts to calm the situation internally away from the media spotlight, the FIA has confirmed that it will not get involved, Stewards in Spa having already dismissed the clash as a "racing incident".

"The FIA will not intervene in this issue," said a spokesman for the FIA, admitting that it would require a "new element" in order for its Stewards to open a fresh investigation.

"A comment alleged to have been made in an internal briefing and later denied by the team itself does not constitute such a 'new element'," added the spokesman.