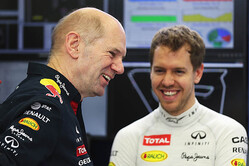 As he prepares to turn his back on F1 and take Red Bull into new realms, design guru Adrian Newey admits to frustration with current formula.

Whilst most of his colleagues at the official FIA press conference on Friday, were effectively saying that 'all is well, kindly move along', a weary Newey, who has designed title winning cars for three different F1 teams, voiced his frustration.

Asked if he thought it mattered that F1 cars in 2014 are slower than their 2004 counterparts, the Briton replied: "I think lap time per se is not necessarily the be-all and end-all.

"I think the critical thing is the cars should look fast," he continued, "and, if you're sitting there watching television that it should be 'wow, those guys are superheroes, I couldn't do that.'

"If I'm honest I don't think the current cars really do that," he admitted. "I think If you watch MotoGP then you certainly have that feeling, that those guys are superheroes, whereas the current crop of cars, their power-to-weight is not fantastic. Going back to the 1300hp in qualifying Formula One cars that were quite a bit lighter than they are now. Then those things, you had to bolt on some fairly special appendages to drive them in qualifying."

Though no names were mentioned, with a clear nod to the fact that Max Verstappen will make his F1 debut aged 17, the Dutch youngster having already claimed that he believes driving in big cities is more dangerous, Newey continued: "I think the fact that young drivers - no disrespect to them at all - that they can jump in and instantly be at the front, or competitive certainly, is an interesting one.

"I don't think there's an easy answer but I think it would be good to make the cars a bit more difficult to drive in truth. I think the extra torque of the new engines is good in that respect - although there's obviously lots of ways of producing more torque. I think the way the old regulations had gone was very much with a small capacity, high-revving normally aspirated is bound to be low on torque. That's my personal opinion."

His frustration was even more obvious when asked about the introduction of low-profile tyres to the sport.

"I think, and maybe I'm ignorant of what's been going on, but as far as I understand, the only reason for proposing this is to suit... to make it look more like the road tyres that that particular tyre manufacturer makes," he said. "So it's not being done for technical reasons, it's not being done for performance reasons, it's being done purely for styling and commercial reasons and I think that to me does not seem the right reason to make a technical change."