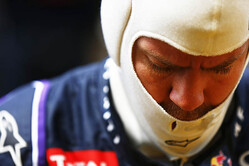 Christian Horner has leapt to the defence of Sebastian Vettel claiming that, amongst other things, the German is worn out.

While the world-champion, like many, has been blown away by the domination of Mercedes this year, he has also lost out in the in-team battle with new teammate Daniel Ricciardo.

From the outset the popular Australian has clearly been unfazed by Vettel, and whilst the German has clearly struggled with the 2014-spec machines Ricciardo has simply kept his head down and got on with it. A number of sensational performances, that have drawn praise from the likes of Fernando Alonso, have left the Australian third in the championship - 43 points ahead of Vettel - and with two wins.

However, Horner has leapt to Vettel's defence, telling Germany's Auto Bild Motorsport that whilst the battles of recent years may have left him drained, and he is still adapting to the 2014 cars, the German should not be written off.

"It is a combination of several things," said Horner. "First, when you have fought for the title for five years, it does wear you out a little bit, but that is not the fundamental problem.

"The way Sebastian brought out those extra tenths from the car in recent years was quite unique," he continued. "He is very sensitive to the behaviour of the car, especially when braking."

"The driveability was really bad, so Seb could not look after the tyres in the way that he always has done. The German used to "drive a bit like a ballerina, dancing on the throttle and the brakes," added Horner, a style the German found impossible with the 2014-spec cars at the start of the season, but which he is now slowly coming to terms with.

"His pace in Hungary showed he is getting the feeling for the car back again," said Horner. "And we can't forget how many mechanical problems Sebastian has had, many of them just little things that have disrupted his flow. So he has had less time to adapt his driving style."

Despite being 174 point adrift of Mercedes, Horner insists Red Bull has done well this season.

"Compared to the theoretical handicap we have, what we have actually achieved in the first half of the year is remarkable," he said. "To have won two races, had front row starts, podiums, is a remarkable achievement, all things considered. Obviously, it's not where we are used to being, but the team has shown real character to dig in and fight back."