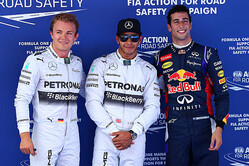 Lewis, your fourth pole of the season and this time you had to save the best until last.
Lewis Hamilton: Yeah, it's been a tough day and Nico has been driving really well, through P3 and also through qualifying and so I didn't know if I'd be able to get it, but right at the end I had to eke out absolutely everything and more from the car. But coming here this weekend, we didn't know where everyone was going to be, so to see the develop that has gone on and the hard work that has gone into getting our car ready for this week - it inspires me. So a really big thank you to the team. To have the kind of performance we have, I've never really known that before. Still, it's very difficult out there,. the track conditions are pretty poor, but I', overwhelmed I'm so happy to have had that.

Nico, obviously Lewis was looking strong yesterday but you were fastest in Q1 and Q2, so you obviously found something overnight? Given how it's all; ended up are you a little disappointed?
Nico Rosberg: Yeah, definitely very disappointed. I don't particularly enjoy coming second to Lewis. I am of course disappointed but in the end it was a good lap from me, so Lewis just did a better job and that's just the way it is. Anyway, it's still all to play for tomorrow. Second place is only a little bit away from optimum because all it takes is a good start tomorrow and then I'm in the lead again. That's the good thing about it and that's why it's still all to play for.

Daniel, another top three, a good day for you personally, obviously problems for you team-mate, Sebastian, in Q3 there, and a fairly big margin between Lewis and yourself there on the grid.
Daniel Ricciardo: Yeah, I think we're again sort of best of the rest but that's not quite good enough, we're still a second off and the lap, I thought my lap was not too bad, so I was expecting a smaller gap than that. I think we've made some improvement but they - they being Mercedes - have as well. So we would have liked to have closed that but we have some work ahead of us. On a positive note we're a clear third today. I think we had a pretty to P4, so that's not too bad, but for sure we want to get closer to the front two.

Well done. Coming back to you Lewis. You've never won here: why is that and how much would it mean to you to put that right tomorrow?
LH: There are lots of different circumstances, situations I've been in but generally, it's not being fast enough. Even going into today I lost a bit of pace today, so I'm really even happier knowing that I dropped a bit of pace but was able to get back at the front. In the past I guess it's just not been my time, so I'll do everything I can to bring some really good points for the team and let's hope that means something positive.

So, Lewis, during Q1 we heard a radio message from you saying "I don't know how but we've made this car worse." What were you feeling at the time and how did that translate into what happened at the end when you managed to get pole?
LH: Well, yesterday I had such a great day and was really happy with the car and then, often when things are that good, you generally don't want to change much but we changed a couple of things overnight in the hope of making it a little better. Small things, like a half a millimetre here and there. The smallest of tweaks. But today the track grip, I think went down and today my car's been a real handful for me. Just lots of oversteer, very inconsistent corner to corner. So it was kind of back to square one, where I was in P1. And once you're in qualifying there's nothing you can do. We made some changes going into qualifying but I was generally struggling. So that's why in Q1 you saw I was half a second off Nico, just struggling to put a lap together. But at the end I just did it by the skin of my teeth.

So, you found it yourself, you say?
LH: Well a little. I couldn't change anything so I really had to tweak a little bit the diff settings, otherwise just drive a little bit differently to just get the car around the lap. Obviously we were very quick but it doesn't matter how fast your car is, we take it to the limit. That's what all of us drivers do, we take our package to the limit. We're on the edge of our limit.

Nico, you're still leading the Drivers' World Championship, tomorrow's an important day, some thoughts on that. But also, everyone's come here with updates, and as Daniel said, you perhaps expected the gap to you guys to be smaller. Do you feel that, if anything, Mercedes have slightly pulled ahead of the opposition?
NR: No, I wouldn't say that but it looks like we've managed to keep the gap consistent - and that's an achievement already. That's fantastic and I'm very happy about that - great job from the team and everybody because our ambition is to make the gap bigger, not try and be shaky and hope they don't close the gap too much. No, we want to grow the gap. Nearly managed to grow the gap, I think we kept it consistent and that's fantastic to see.